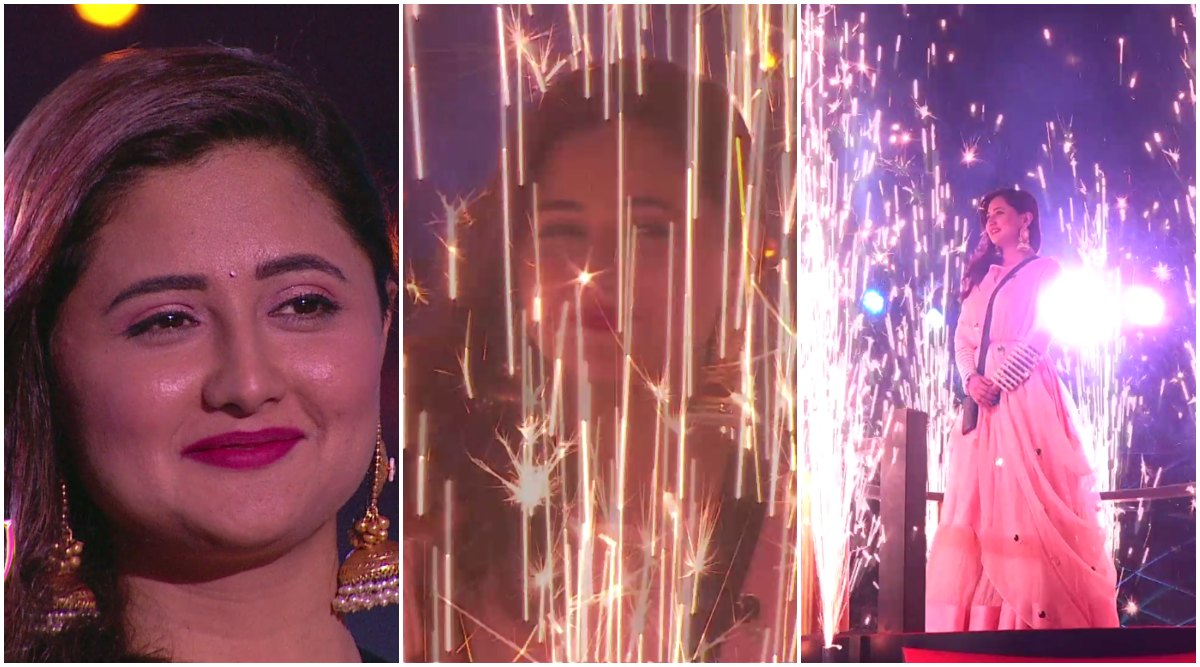 Along with already revelling in the tag of being one of television's favourite bahus, Rashami Desai is being loved for being her real self in the Bigg Boss 13 house. After an early elimination and an extremely low phase inside the house where Rashami became extremely vulnerable, the lady bounced back and how, she is one of the top three contestants inside the house to have entered the grand finale, along with Asim Riaz and Sidharth Shukla. However, Rashami's journey has seen it all, ups and downs, especially the latter, which Rashami managed to tide over with determination. Rashami Desai Birthday: From Sexy to Neon-y, 10 Stylish Looks of the Bigg Boss 13 Babe Which Scream Glamour (View Pics).

Here is a list of all the jhamelas that the Gujju Girl battled with complete focus and determination:

In one of the Weekend Ka Vaar episodes, after Salman Khan witnessed Arhaan proposed to Rashami, the host exposed Arhaan Khan like never before. Salman Khan asked Rashami is she knew of Arhaan's marriage and his Child. Yes, emphasis on the child because Rashami was entirely clueless about it.

The episode saw Rashami unconsolable and broken and disturbed, so much that Salman Khan, in a first of many, entered the house to console Rashami and advise her and Arhaan on how to take their relationship forward. However, there was nothing that could save their relationship. Bigg Boss 13 Weekend Ka Vaar Preview: Salman Khan Exposes Arhaan Khan, Reveals To Rashami Desai That Her 'To-Be' Fiance Has A Child (Watch Video).

Don't believe the above statement. The turbulence that was Sidharth Shukla and Rashami Desai's relationship, took its worst turn when in one of the episodes, Sidharth, in his classic temper, told Rashami Desai, "Tere jaison ko maine apne ghar mein lena band kar diya." This angered Rashami so much that she flung her chai on Shukla and he too returned the favour. And the duo exchanged the choicest of words. We also saw Arhaan Khan impose himself in the fight and even sit with his torn shirt (Sidharth Shukla shredded it in one go) for the remainder of the episode. Bigg Boss 13 Weekend Ka Vaar Preview: Rashami Desai Throws Chai On Sidharth Shukla and Calls Him 'Kachra', Salman Khan Calls Her Behaviour 'Disgusting' (Watch Video).

In yet another Weekend Ka Vaar episodes, a caller of the week person was behind yet another explosive fight between Rashami and Sidharth. The caller asked Sidharth why after apologising, he ends up fighting with Rashami. To this, Rashami answered that they never did get along, and that argument then snowballed into a full-blown argument where Sidharth quipped, "Peechhe aati hai khudh... Goa tak pahunch gayi thi." To this, Rashami very calmly replied, "Kutte bhaunkte hain toh AC gadi mein nikal jaana chahiye." Bigg Boss 13: Sidharth Shukla Alleges That Rashami Desai Followed Him To Goa (Watch Video).

In the latest Bigg Boss 13 segment when housemates' connections entered the house, Devoleena Bhattacharjee and Himanshi Khurana had entered to support Rashami Desai and Asim Riaz respectively. And that was quite the eye-opener for Desai. Himanshi revealed that she met with Arhaan who was not happy with his girlfriend's behaviour inside the house. When Salman played this clip for everyone, it left Rashami Desai extremely irked and she told Himanshi to tell Arhaan that she was not interested in his games anymore. Bigg Boss 13: Did Rashami Desai Just Break Up With Arhaan Khan On National Television? (Watch Video).

Later on, during the media press con, when questioned, Rashami clearly told the reporters that she 'did not see a future for her relationship with Arhaan.'

In the recent BB Ki Adaalat with Rajat Sharma, when questioned, Sidharth Shukla alleged Rashami Desai of maligning his image. Sidharth says that Rashami got an article issued in a daily where he was blamed for being unprofessional and since then began their fights. Rashami also says that she will end her relationship with Arhaan officially once she leaves the Bigg Boss 13 house. Later on in the kitchen, Rashami talks to Sidharth and says that she had tried to stop the article from getting published, but someone else was behind the article and that she couldn't reveal his/her name. Bigg Boss 13: Sidharth Shukla Passes a Nasty Comment on Rashami Desai, Says ‘Iske Relationships Toh Har Mahine Badalte Hai’ (Watch Video).

Despite Rashami Desai's best efforts to keep her personal life out of the public glare in the Bigg Boss house, she failed, with the most private deets of her relationships, personal and professional, being spilt for people to interpret. However, amidst all the mess, Desai has managed to uphold herself and handled all of her problems head-on and also with utmost dignity. Kudos to Rashami!