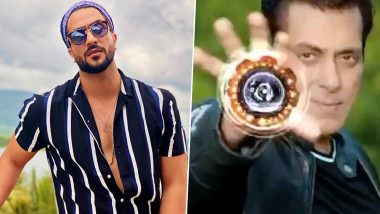 Among the many probable contestants of Bigg Boss 14, one name that recently joined the list, was that of Yeh Hai Mohabbatein actor Aly Goni. The actor, who was last seen in Khatron Ke Khiladi: Made in India, was rumoured to have signed on the dotted line to parfticipate in the next season of Bigg Boss 14, which co-incidentally also has his rumoured girlfriend Jasmin Bhasin in this season. However, that's not the case anymore. Aly opted to make his digital debut, rather than do BB14. Bigg Boss 14: Jasmin Bhasin, Eijaz Khan, Naina Singh, Nishant Singh Malkani, Karan Patel, Aly Goni and Others, Is This the List of Participants On Salman Khan's Show?.

For those who are unawares, Aly has bagged Boney Kapoor's Zidd, a web series that stars names like Amit Sadh, Amrita Puri and Sushant Singh. "Aly will resume shooting for the series Zidd from next month. The actor is quite excited for it as he will be making his digital debut with this," a source was quoted as saying in SpotboyE. Bigg Boss 14 Premiere Date Announced: Salman Khan's Show Will Welcome its New Contestants on October 3 (Watch Video).

This time around, Bigg Boss 14 will have names like Jasmin Bhasin, Nishant Singh malkani, Naina Singh, Pavitra Punia, Eijaz Khan, Rahul Vaidya among others on board the show. Names like those of Rajeev Sen, Adhyayan Suman, Karan Patel and Ritvik Arora also emerged but they have turned down the show.

(The above story first appeared on LatestLY on Sep 18, 2020 04:05 PM IST. For more news and updates on politics, world, sports, entertainment and lifestyle, log on to our website latestly.com).