Bigg Boss 14 introduced the biggest twist of the season - the Finale Week where one by one all but 4 contestants will reach the finals. And tonight's episode of BB14 sees the contestants battle one another fiercely to stay safe from elimination. 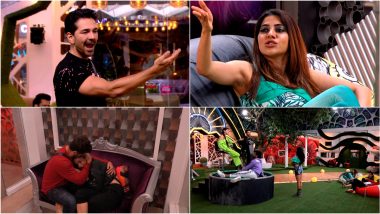 Bigg Boss 14 introduced the biggest twist of the season - the Finale Week where one by one all but 4 contestants will reach the finals. They will then have to beat challengers (ex-Bigg Boss contestants) to go ahead in the game. And tonight's episode of BB14 sees the contestants battle one another fiercely to stay safe from elimination. Check out the highlights below: Bigg Boss 14 December 1 Synopsis: Contestants Are Pelted With Teekhe Sawaal, Aly Goni and Jasmin Bhasin Face A Tough Choice.

Mountain Out Of Molehill

Eijaz Khan's conversation about Shehzad Deol irks Jasmin Bhasin who tells Nikki Tamboli about how he is manipulative. Nikki confronts Eijaz and Eijaz confronts Jasmin and the molehill becomes a mountain. Rahul too gets involved in the issue and everyone gets involved. Totally unnecessary, if you ask us! Bigg Boss 14: Hotelier Sumit Maheshwari Claims Pavitra Punia Is Still Married To Him, Says She Cheated on Him 4 Times.

Bigg Boss announces that the first finale week's eviction will take place. The contestants have to pair up and answer some harsh questions posed to them by their fellow contestants. They have to keep the conversation going until 37 minutes. The one closest to the goal will win immunity whereas the pair who is least accurate, will face the danger of elimination.

First up are Kavita Kaushik and Nikki Tamboli who are pelted will all sorts of questions. Next up are Aly Goni and Jasmin Bhasin and Kavita and Nikki pelt them with piercing questions. Rubina attempts to resolve her issues with Jasmin but nothing happens. Abhinav and Rubina are pelted with questions about their separation which irks Abhinav later on. Eijaz and Rahul too are bombarded with questions.

Bigg Boss announces that Aly and Jasmin exceeded 20 minutes more than the target time and hence are declared unsafe. But they are given the choice - to decide amongst themselves and pick a name who will leave the show.

In the next episode of Bigg Boss 14, we'll see Aly and Jasmin argue with each other on who will leave the show. While Aly roots for Jasmin all the way, the actress cries her heart out saying that she wants to either play the game with Aly or leave the show.

(The above story first appeared on LatestLY on Dec 02, 2020 12:05 AM IST. For more news and updates on politics, world, sports, entertainment and lifestyle, log on to our website latestly.com).