Bigg Boss 14s episode 16 saw many ups and downs. From Nishant Singh Malkhani getting dethroned as the captain of the house to Pavitra Punia and Rahul Vaidya's fight. Check out the full story here. 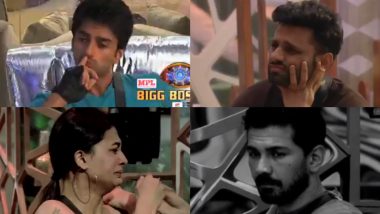 The current season of Bigg Boss 14 is not doing wonders on the TRP chart and one of the main reasons behind the same can be the dull line-up of contestants this season. Until now, we just saw the seniors mentoring the contestants, but now they are finally out of the house and the real game will soon begin. It will be from now onwards that we will get more close to the housemates. Having said that, and coming to tonight’s (Oct 23) episode of Bigg Boss, we see captain Nishant Singh Malkhani losing his power and Pavitra Punia cries because of Rahul Vaidya. In case, you’ve missed the scoop, here are 5 highlights from the night. Bigg Boss 14 October 22 Episode: Nikki Tamboli Disowns Her Friends, Nishant Singh Malkhani Becomes the First Captain of the House - 5 Highlights of BB14.

Following the argument from the previous episode, we see the same getting continued today wherein Nikki Tamboli denies to come out of the Red Zone The reason behind the same is that she feels betrayed by her friends Rahul, Nishant and Jaan in the captainship house. However, Rubina advices captain Nishant to lock all belongings of Tamboli if she does not exit the Red area. Listening to Dilaik's tunes, Malkhani does the same. But after all this drama, Nikki finally gets back to the green zone. Phew!

A fight erupts between Nikki Tamboli and Rahul Vaidya wherein an insensitive sentence by the latter irks the former. FYI, when Nikki had come out of the red zone, she had requested the boys in the house to help get her belongings out of the BB mall. To this, Rahul had replied that it’s her thing and she needs to clear the mess herself. This is what leads to chaos between the two.

It has been a rule inside the Bigg Boss house since season one that mic needs to be worn while talking. Captain Nishant breaks this rule multiple times on tonight's episode and that's not it as he also was seen discussing nominations with Nikki and Jaan. BB also tags him a puppet and you know why! And so Nishant gets dethroned as the captain of the house.

Pavitra Punia confronts Rahul Vaidya and asks him if he ever uttered that she has a 'crush' on Abhinav Shukla. Vaidya gives a nod to the sentence and we see Punia's bad side. She screams at Rahul for assassinating her character on national TV. Even Rubina jumps into this and consoles a crying Pavitra by saying, "ye uski gandi soch hai na babu." However, Rahul is not sorry about this.

After the whole Punia and Vaidya drama, the other inmates discuss how Rahul is indeed the most annoying person in the entire house. Abhinav while talking to Rubina about the singer adds that as the show will move ahead, Rahul's gross side will be out. Cut straight to next day morning, Rahul locks horns with Rubina-Jasmin over roti. Bhasin says he needs to learn the decency to talk.

That's it, guys! Episode 16 of Bigg Boss 14 was nothing but a roller-coaster ride. However, the highlight of tonight was ofcourse Pavitra's fight and Nishant being stripped away as the captain of the house. Stay tuned!

(The above story first appeared on LatestLY on Oct 24, 2020 12:02 AM IST. For more news and updates on politics, world, sports, entertainment and lifestyle, log on to our website latestly.com).