It can be rightfully said that with seniors Gauahar Khan, Hina Khan and Sidharth Shukla finally gone from the Bigg Boss 14 house, the game has now finally begun. The first task of the house that Bigg Boss introduces is the captaincy task. 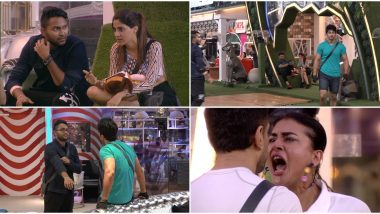 It can be rightfully said that with seniors Gauahar Khan, Hina Khan and Sidharth Shukla finally gone from the Bigg Boss 14 house, the game has now finally begun. The first task of the house that Bigg Boss introduces is the captaincy task and Nishant, Rahul and Jaan are seen strategising on how to play the game. The first leg of the task that happened on October 21, sees Pavitra and Eijaz still keeping at it with their different of opinion on whether it was Rubina or Abhinav whp came out of the doll house last. And here are the highlights of tonight's episode. Bigg Boss 14 October 22 Synopsis: Nikki Tamboli's 'Friends' Jaan Kumar Sanu and Nishant Singh Malkhani Don't Want Her To Be the First Captain.

Pavitra and Eijaz get up close and personal with each other (verbally) and a screaming match ensues between them about hurting each other emotionally and and backstabbing each other in friendship. The duo keep crossing paths and voices keep raising between them. They keep screaming at each other and honestly it gave us a headache. Nikki and Rahul try to separate them. Bigg Boss 14 October 21 Episode: Sidharth, Hina, Gauahar Say Goodbye to the Show, Pavitra Punia, Eijaz Khan in Red Zone – 4 Highlights of BB 14.

Nishant and Jaan Against Nikki For Captaincy

Nishant and Jaan talk about how they don't want Nikki to become the captain as she won't make the right choices. Nishant is seen making strategies with Abhinav, Rahul, Jasmin and Jaan to not make Nikki the captain of the house. Bigg Boss 14: Gauahar Khan Says I Wish Pavitra Punia Had the Courage to Abuse Me on My Face.

Nikki is left disappointed by her friends Jaan, Rahul and Nishant when all of them expres their desire to become the captain. Nikki approaches sanchalak to make her win the task. Nikki also announces her decision to break up with her 'fake' friends. Nikki backs out and asks Rubina to be in the game. Pavitra passes a judgement on Nikki and Jaan's fight and this does not go well with the latter. She also goes on to cross over to the Red Zone and disown her team. Nikki calls Jaan fake and say Rahul hurts her less than Jaan. After the task, Nikki goes to talk to Jaan in full attitude and tells him to sort things with her. Jaan explains that her calling him fake hurt him the most.

With Rubina not being able to pick up her doll, and Rahul leaving the house second-last, sanchalaks ask him to leave the game. But he disagrees. After considering all the possibilities, sanchalaks decide that Rubina will be out of the game. This does not go down well with Rubina and Abhinav. The next round sees Rahul and Rubina stay back in the house and refuse to step out of the house with each other's dolls. Rahul is hurt that Nishant picked Jaan's doll and not his, which does not go down well with Rahul. Nikki also instigates Rahul to not leave the doll house. Rahul gives up and comes out of the house. The next round sees Rubina out and the final one sees Nishant become the captain.

These were the highlights of tonight's episode. With all the backstabbing and dosti break ups and accusations against sanchalaks, Nishant becomes the first captain of the house. Jaan is seen getting emotional over Nikki's harsh words and Nishant comes to him to console him. Nikki once again starts the fakeness debate with Rahul and breaks down and goes to Pavitra in the red zone. The next episode will see a huge showdown between Rahul and Pavitra over the former stating that she has a crush on Abhinav. And this bring the show house down.

(The above story first appeared on LatestLY on Oct 23, 2020 12:02 AM IST. For more news and updates on politics, world, sports, entertainment and lifestyle, log on to our website latestly.com).