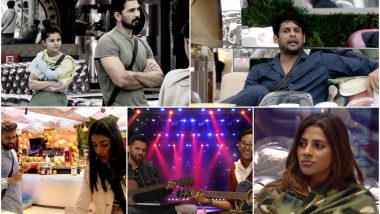 Bigg Boss 14 has been picking up pace and the next episode is full of unexpected incidents. The debate that has been raging on between Rubina Dilaik and Nikki Tamboli over who will cut the vegetables and who will cook now gets even more heated. It is the Senior, Sidharth Shukla who has now stepped into the arena. Sidharth tells Rubina that cooking and cutting will be done by the same people who have been selected by the Seniors. Bigg Boss 14 October 16 Episode: Sidharth Shukla Roars, Jasmin Bhasin Wins Against Nikki Tamboli - 5 Highlights from BB 14.

Rubina says it is a huge task for her to cook and cut for 13 people in the house, however, the Seniors, especially Sidharth, remains adamant. Sidharth asks Gauahar Khan to delegate both cooking and cutting duties to Rubina which irks her and she calls him out for being unfair. Bigg Boss 14 October 16 Synopsis: Mentors Hina Khan and Sidharth Shukla Get Into A Heated Argument.

Pavitra Punia is the next person in the house to lose her cool on Rahul Vaidya when he interrupts a conversation between Jaan Kumar and her. The two have a heated exchange and sparks fly off as voices are raised and the two don’t seem to agree with each other. Rahul asks Pavitra to stop behaving like a villain and a bully, while Pavitra tells him to not step into other people’s conversations with a malicious intention. Bigg Boss 14: Sara Gurpal Blames Sidharth Shukla for Her Eviction, Says ’Cannot Give a Lap Dance on National Television'.

To cool things up in the house, the two talented singers Jaan Kumar and Rahul Vaidya indulge in a musical jugalbandi that each and every member of the house enjoys. Even those members who have fought are now seen swaying to the magical tunes that the two singers belt out one after the other. The housemates are all hypnotized by the impromptu musical concert and Nikki even gives a big, mushy hug to Jaan! In this jugalbandi between the two, only one singer will be declared the winner and be given one special privilege!

Bigg Boss now decides to pose a very serious question that may affect Nikki Tamboli’s position as a Confirmed housemate. The fiery contestant is taken aback when Bigg Boss asks the housemates to decide whether Nikki deserves to be a confirmed housemate. Nishant Singh Malkhani and Jaan Kumar strongly disagree. Surprisingly, even Jaan, who has been seen developing a special bond with Nikki, tells her that she is not behaving in the right manner.

He tells her that she has become too egotistical after being declared a confirmed contestant. Nikki doesn’t take this well and argues with Nishant about not being a true friend and for taking a stand against her just to please the other contestants. Will Nikki lose her status as the confirmed contestant? Will Bigg Boss take away her special status?

(The above story first appeared on LatestLY on Oct 17, 2020 04:32 PM IST. For more news and updates on politics, world, sports, entertainment and lifestyle, log on to our website latestly.com).