Bigg Boss 14's Sara Gurpal blasts at Sidharth Shukla for being unfair. Also, blames the Bigg Boss 13 winner for her eviction. Check it out. 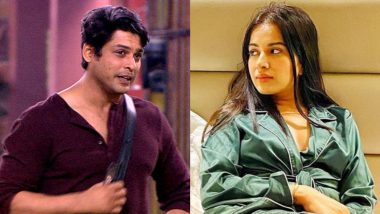 Punjabi actress/singer Sara Gurpal was the first contestant to be evicted from Bigg Boss 14. This decision was taken by the toofani seniors Hina Khan, Gauahar Khan and Sidharth Shukla which came as a shocker for many. While Hina and Gauahar wanted Nishant Singh Malkhani to go out of the house, it was Sidharth Shukla who wanted to kick Gurpal out of the show. Now, after being evicted from BB 14, Sara opened up about how she performed extremely well in all the tasks in the house except the one where she had to give a lap dance to Sid. Bigg Boss 14's Sara Gurpal's Eye Injury Pics Go Viral, Was Hurt By Nikki Tamboli's Acrylic Nails.

Speaking to Navbharat Times, Sara said, "Without considering that I was trying to play the game despite my injury, you talk about a task that I was not comfortable with. This is a show about character and personality, and my personality is such that I cannot give a lap dance on national television. Whether this is right or wrong should have been judged by the audience."

“Task mein bhi sirf Sidharth ko lap dance ke alava baaki do task maine kaafi achche kiye (When it comes to tasks, except for the one in which I was required to give Sidharth a lap dance, I performed quite well in the other two),” she added. Sara Gurpal in Bigg Boss 14: Tu Chahida, OK Bye and More – 7 Songs of the Punjabi Singer-Actress That You Should Tune to ASAP!

Well, we wonder, what would be Sid's reaction to Sara's this statement. After the singer was out of the show, pics of her injured eye also had started doing rounds on social media which claimed she was hurt by Nikki Tamboli's acrylic nails inside the house. Stay tuned!

(The above story first appeared on LatestLY on Oct 16, 2020 08:43 PM IST. For more news and updates on politics, world, sports, entertainment and lifestyle, log on to our website latestly.com).