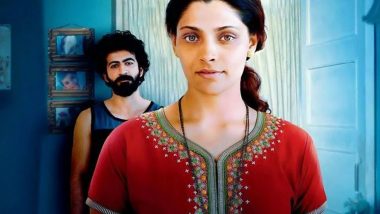 It was earlier this year when Netflix had announced about its new original film projects for this year. The streaming giant had revealed its collaboration with the ace filmmakers of the country -  Anurag Kashyap, Karan Johar, Dibakar Banerjee, and Vikramaditya Motwane. And now, here’s the update on Kashyap’s series, Choked: Paisa Bolta Hai. The makers have announced about this film’s release date. Starring Saiyami Kher and Roshan Mathew in the lead, Choked: Paisa Bolta Hai will be premiered on Netflix on June 5. Netflix Announces 4 Indian Films For 2020, Courtesy Anurag Kashyap, Karan Johar, Vikramaditya Motwane and Dibakar Banerjee (Read Tweet).

About this suspense drama, Anurag Kashyap stated, “Choked: Paisa Bolta Hai is very close to my heart. It is the story of a strong-willed middle-class housewife, who finds cash flowing out of her kitchen sink every night, and how this changes her life. It is about relationships - and the precarious balance between truth, power and money,” reports IANS. Saiyami Kher who’ll be playing the character Sarita Pillai mentioned, “Sarita is a 30-year-old middle-class woman. She is the sole breadwinner, she is overworked and frustrated, yet tenacious and always scheming to build ‘that dream’. At one level Sarita is that every-woman. Nihit Bhave, our writer, has beautifully weaved the complexities of this middle class family. And I thank Anurag for trusting me with Sarita and letting me bring her to life. Working on the film has been a life changing experience for me." Peddlers: Anurag Kashyap, Vijay Varma, Guneet Monga Demand Eros to Release Vasan Bala’s Debut Film on an OTT Platform (View Tweets).

Roshan Mathew who will be seen playing Sushant Pillai described about his character as ‘defeated, disgruntled, insecure, and suspicious’. Anurag Kashyap had earlier collaborated with Netflix for the series Sacred Games, Lust Stories and Ghost Stories.

(The above story first appeared on LatestLY on May 19, 2020 09:46 AM IST. For more news and updates on politics, world, sports, entertainment and lifestyle, log on to our website latestly.com).