Let's hope that Eros hears their pleas and release Peddlers either on their platform, Eros Now, or any other platform. After all, you cannot just keep the collaborative effort of hundreds of minds and their perspiration locked down in a box and forget where you kept the key. 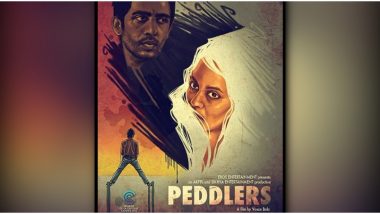 Contrary the popular perception, MKDNH wasn't Vasan Bala's first film as a director, though it is the first to see a theatrical release. He first made Peddlers, a gritty crime drama, way back in 2012. Peddlers starred Gulshan Devaiah, Nimrat Kaur, Siddharth Menon and Kriti Malhotra. The film was about how young boys are manipulated into drug deal.

Watch the Trailer of Peddlers below:

The movie was premiered at the 2012 International Critics' Week, an independent film event which runs parallel to the Cannes Film Festival where it got two nominations. Here's what the critics have to say about Peddlers.

The Hollywood Reporter - " Though it takes a long time coming together, the Hindi-language film does finally succeed in its action-packed last half-hour, rewarding audiences who hang on for that long."

Variety - "Bala worked as assistant helmer to anointed alternative Indian director Anurag Kashyap, whose association here as producer should prove attractive to followers of the non-Bollywood market. Kashyap’s impact is largely felt in the pic’s gritty cosmopolitan realism, though Bala seems more influenced by Americans like Scorsese, James Gray and even a touch of Abel Ferrara. He’s written compelling characters (though some take too long to reach that state), and his facility with dialogue outstrips many other indie subcontinentals."

However, despite having made in 2012, Peddlers have failed to get a release in India. Now recently, reacting to a tweet from CinemaRare, a popular Twitter handle that disburses information on films on various OTT platforms, Anurag Kashyap asked Eros Now, the company that holds rights to Peddlers to release Peddlers on an OTT platform.

Hello @ErosNow .. this is your chance to redeem yourself . Please put @Vasan_Bala ‘a “ Peddlers” out on a streaming platform .. thank you very much https://t.co/G536UImGe6

Soon, other film celebs and critics supported Kashyap's demand and requested Eros to release the film on a digital platform soon.

Time and Again - NO RESPONSE ! #ErosReleasePeddlers - honour your contract and release our movie! Atleast respond to my mails 🙏🏽

I’ve Seen the film. It’s gonna be so good for everyone to watch it. Pls come to a resolution guys and release this love child. #Peddlers @ErosNow https://t.co/y4US9LFAJK

It's one film for you @ErosNow, but for @Vasan_Bala, his team + hundreds of thousands of fans it's a small masterpiece (I've seen the film so I can say that), they have waited for 8 yrs. Please release #Peddlers on a streaming platform. You will earn our respect & good karma. https://t.co/wVJ2hiqkMz

A damn shame @ErosNow is just sitting on @Vasan_Bala ‘s Peddlers, which did the Cannes rounds in 2012! 8 years! https://t.co/3ezrNO4SYv

Even Vasan Bala himself requested Eros to let the film see the light of the day.

This quarantine I'll try my best to beg everyone sitting at home to please put "Peddlers" on some platform. Also @ErosNow ...what is is it that is so monumentally hindering it's sneaking into Eros Now? You don't even have to talk about it...just silently drop it. Like hush hush..

Let's hope that Eros hears their pleas and release Peddlers either on their platform, Eros Now, or any other platform. After all, you cannot just keep the collaborative effort of hundreds of minds and their perspiration locked down in a box and forget where you kept the key. While we are at it, let's also release Anurag Kashyap's own Paanch on some platform too!

(The above story first appeared on LatestLY on Apr 07, 2020 06:26 PM IST. For more news and updates on politics, world, sports, entertainment and lifestyle, log on to our website latestly.com).