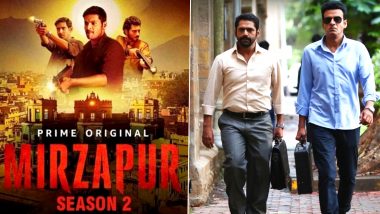 From epic comebacks to new thrilling journeys to flashback into real life incidents, streaming services are all set to add new chapters to their content library as the festive season comes up and cinema halls continue to remain shut. Mirzapur 2: Shweta Tripathi Describes the Second Season of Amazon Prime Show As ‘Masterful’ and ‘Suspenseful’

Amid the ongoing Covid crisis, people are opting to get their dose of entertainment from the OTTs, making the platforms go the extra mile to keep pace with the never-ending demand. Samantha Akkineni Promises The Family Man Season 2 Will Be a ‘Crazy Ride’ As She Dubs For the Amazon Series (View Post)

IANS lists a few shows that should create the buzz:

It's finally time for the second season to unfold. Starring Pankaj Tripathi, Ali Fazal, Rasika Duggal and Shweta Tripathi, the second season is expected to be more bloodsoaked and vengeful. It will be interesting to see how the story unfolds after the death of Vikrant Massey's character, Bablu. The show drops on Amazon Prime Video, October 23.

Manoj Bajpayee returns in the second chapter, and joining the cast this time is southern star Samantha Akkineni. While Bajpayee impressed with his role in season one of the show, Samantha grabbed attention with her role in the digitally-released Tamil film "Super Deluxe". Season two of "The Family Man" streams on Amazon Prime Video, the release date is yet to be officially announced.

Saif made an impressive OTT debut with "Sacred Games". He now returns to the medium in "Tiger Zinda Hai" director Ali Abbas Zafar's show "Tandav", which is about the dark edges of Indian politics. The show also stars Sunil Grover, Mohammad Zeeshan Ayub and Sarah Jane Dias. It will stream on Amazon Prime Video, release date yet to be announced.

Filmmaker Hansal Mehta's series will tell the story of one of the biggest financial scams in the Indian stock market. The financial thriller is based on Debashis Basu and Sucheta Dalal's book "The Scam". It drops on SonyLiv and the official release date is yet to be confirmed.

Mira Nair's screen adaptation of the Vikram Seth novel "A Suitable Boy" features Tabu, Ishaan Khatter and newcomer Tanya Maniktala. It is a story of two young lovers who dare to break tradition and stereotypes in newly independent India. The limited series has already won applauds upon its international release on BBC One. For Indian viewers, it will stream on Netflix soon. Date yet to be confirmed.

"Bombay Begums" follows the journey of five women in contemporary urban India, who wrestle with desire, ethics, personal crises and vulnerabilities and ambition. Directed by Alankrita Shrivastava and Bornila Chatterjee, it stars Pooja Bhatt, Shahana Goswami, Amruta Subhash, Plabita Borthakur, and Aadhya Anand. To be released on Netflix, the date is yet to be confirmed.

The series, starring Konkona Sensharma and Mohit Raina, is expected to be a fictionalised account of the terror attack that took place at Cama Hospital, among other venues, on November 26, 2008. Directed by Nikkhil Advani, it will stream on Amazon Prime Video. Date yet to be confirmed.

(The above story first appeared on LatestLY on Sep 20, 2020 12:50 PM IST. For more news and updates on politics, world, sports, entertainment and lifestyle, log on to our website latestly.com).