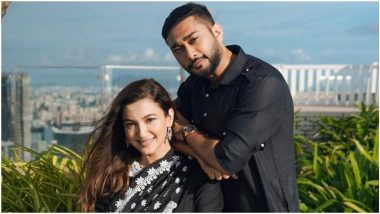 Gauahar Khan is currently locked inside the Bigg Boss 14 house as a senior. This time, despite the fact that contestant Eijaz Khan has a crush on her, there will be no romance for the actress on the reality show. Well, she already has a rumoured boyfriend, Zaid Darbar, outside waiting for her. Zaid and Gauahar keep making social media posts featuring each other but have never confirmed their relationship. In his latest interview, Zaid has refused to put the girlfriend tag on Gauahar and called her a family friend. Bigg Boss 14: Salman Khan Jokes That He Warned Gauahar Khan About Kushal Tandon.

Usually, celebs go for the 'we are just friends' route, but Zaid took it a notch higher and went for 'family friends'. When asked about his wedding plans to Gauahar, Zaid said, "Whose wedding? (laughs). We are just family friends, if there is anything we won't hide, it will come out. Just wait for some time, we will tell everyone whatever it is." Gauahar Khan Gets the Sweetest Birthday Wish From Rumoured Beau Zaid Darbar (See Pics).

But he added, "Yes, but I've heard most probably she is getting married this year. I've heard that too,"

He added, "[Fans] tag me in every video or picture and Rahul also where he asked her to meet him outside and she said 'I am taken'. Yes, I've also heard she's taken,"

Zaid also revealed that Gauahar has met his father. He said, "My father and I share a different relationship. It has a lot of respect typical old school. Till today I don't have that courage to introduce someone to him as my girlfriend. When I introduced Gauahar to him I just told him 'dad she is Gauahar', he told me of course I know her."

(The above story first appeared on LatestLY on Oct 18, 2020 08:46 PM IST. For more news and updates on politics, world, sports, entertainment and lifestyle, log on to our website latestly.com).