And the actor posted a heartfelt open letter dedicated to his character Sikander who is a father to two girls. 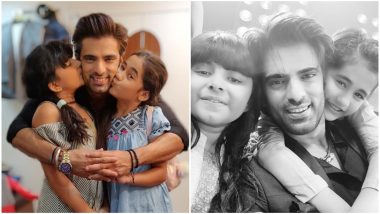 Actor Mohit Malik, who is currently playing Sikander Singh Gill in Star Plus' Kullfi Kumarr Baajewala, has been winning accolades for the portrayal of the successful rockstar and a father deprived of accepting his daughter because of a promise made to another daughter, in the show. And thankfully, the emotionally challenging role of Sikander only seems to have brought out Mohit's acting skills to the fore perfectly. Kulfi Kumar Bajewala: Mohit Malik Undergoes Six Stitches Yet Continues Shoot With an Injured Hand

And while the entire world celebrates Father's Day today, Mohit, who is not yet a father in real life, chose not to be left behind. However, he dedicated Father's Day 2019 to his on-screen character Sikander, who is a father to two beautiful daughters Kullfi and Amyra, characters which are played by actors Akriti Kakkar and Myra Singh.

In an open letter on this day, Mohit wrote down how blessed he is to be playing the role of a father, albeit not yet in real life, but at least in reel life.

And this one comes straight from the heart for all the fathers out there! #HappyFathersDay #PenningMyThoughts

The show, produced by Gul Khan's Four Lions productions focuses on a rockstar whole leaves behind a daughter unknowingly, only to have her knock on his door some years later. However, the present track is showcasing how Sikander is unable to accept Kullfi because of his promise to Amyra.

(The above story first appeared on LatestLY on Jun 16, 2019 07:53 PM IST. For more news and updates on politics, world, sports, entertainment and lifestyle, log on to our website latestly.com).