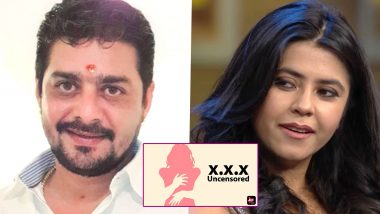 Mumbai, June 2 (IANS) YouTuber Vikas Pathak, known to all as Hindustani Bhau, alleges that he is getting calls from numerous people asking him to "sit and talk", after he filed a police complaint against producer Ekta Kapoor and her mother, Shobha Kapoor, on Monday. Bigg Boss 13 fame Hindustani Bhau shared a video on Instagram on Tuesday where he claimed that he is getting calls from several 'big people' who are requesting him to 'sit and talk'. Bigg Boss 13's Hindustani Bhau Files a Police Complaint Against Ekta Kapoor For Allegedly Defaming Army Uniform In ALTBalaji's XXX Uncensored Season 2 (View Tweet).

"Yesterday, I filed a police complaint at Khar Police Station against Bollywood's renowned ‘Ek Thi Kabootar' Ekta Kapoor. I have been getting so many phone calls from yesterday as if Ekta Kapoor runs their household and sends them ration. Bade bade log call kar rahe hain (big people are calling me). They want me to sit and talk with them. But I don't want to sit and talk with anybody. I want her to apologise to the Indian Army because she and her mother have insulted the Indian Army," Hindustani Bhau said in Hindi. He further stated that nobody can buy him with money and people making such requests should feel ashamed. XXX: Uncensored Season 2: Hyderabad-Based Social Activist Files Complaint Against Ekta Kapoor and ALT Balaji For 'Objectionable and Derogatory' Content, Police Dismisses Case Over Lack Of Evidence (Deets Inside).

Check Out His Video Below:

The scene in question from the show that led to a Hyderabad-based activist also going after Ekta, is where an army officer's wife allegedly insults his uniform by making her boyfriend wear it in his absence, and then later, tearing off the uniform, she gets into bed with her lover. Hindustani Bhau felt that the scene is disrespectful towards the Indian Army and an attempt to insult our soldiers.

The controversial scene has landed the makers in a spot, what with as Twitterati have been responding to the hashtag #ALTBalaji_Insults_Army all through Tuesday.

Meanwhile, a YouTube video where an unidentified person in an Indian Army uniform speaks against Ekta Kapoor's depiction of extramarital affairs is doing the rounds on social media. The video with the caption "Indian Army Soldier expose Ekta Kapoor" was been uploaded on Monday.

Author Harinder Sikka shared the video on Twitter slamming Ekta Kapoor and requesting the Indian government and Chief of Defence Staff Bipin Rawat to look into the matter.

(The above story first appeared on LatestLY on Jun 03, 2020 11:40 AM IST. For more news and updates on politics, world, sports, entertainment and lifestyle, log on to our website latestly.com).