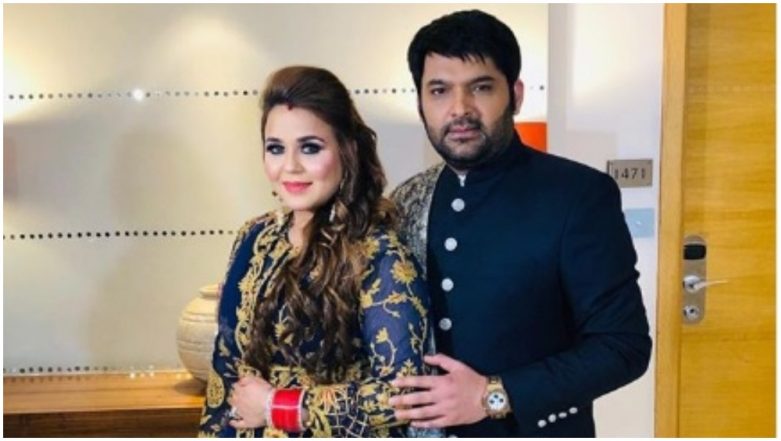 Kapil Sharma and Ginni Chatrath are on cloud 9 as the duo is all set to embrace parenthood. (Photo Credits: Instagram)

Good news for Kapil Sharma's fans. The comedy king Kapil, who tied the knot with his childhood sweetheart Ginni Chatrath in a big fat Punjabi wedding in December last year, is on cloud 9 as he is all set to embrace fatherhood. Yes, you read that right. The comedian-turned actor is soon becoming a father. If the reports are anything to go by Kapil is expecting his first child with wife Ginni. According to a report in an entertainment portal, Kapil's mother is currently in Mumbai with the couple as to ensure all timely preparations. However, no official announcement has been made by Kapil or Ginny yet. Kapil Sharma Turns 38, Celebrates His 1st Birthday After Marriage With Mother, Wife Ginni Chatrath and Mika Singh – Watch Videos

Kapil and Ginni tied the knot on December 12 in a lavish ceremony at The Grand Cabbana resort of Jalandhar in the presence of their friends and family. Just like the recently-wedded Ranveer-Dipika and Nick-Priyanka, the couple had two weddings - a Sikh wedding first, which was then followed by a Hindu ceremony. The couple’s wedding pictures, that were doing the rounds on social media, were being loved very much. Kapil Sharma – Ginni Chatrath Delhi Reception: Sohail Khan Says Some Great Things About Kapil at His Reception! Watch Video

On the professional front, Kapil is currently hosting The Kapil Sharma Show after a brief break. Enthralling and entertaining his audience with the second season of The Kapil Sharma Show, Kapil made sure to top the rating charts and all seems to be well in Kapil's world. Stay tuned to LatestLY for more updates on your favourite celebs.