Kapil Sharma turns a year older and since morning, wishes have been pouring in for the comedian-turned-actor on the social networking sites from his fans and followers. 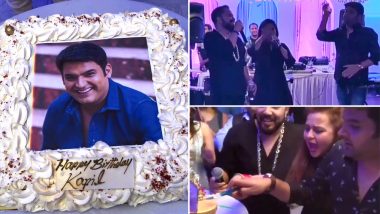 It's the birthday of the comedian who rules the Indian Television. Yes, you guessed it right! Kapil Sharma, who recently made his comeback on the small screen with the new season of The Kapil Sharma Show, turns a year older today (April 2) and since morning, wishes have been pouring in for the comedian-turned-actor on the social networking sites from his fans and followers. For Kapil, this birthday is surely going to be a very special one as this is his first one after the wedding. Kapil, who turned 38 today, celebrated his birthday in style with wife Ginni Chatrath and his mother. The birthday boy cut a few cakes with them on his side and the pictures and videos from his last night's birthday bash are doing the rounds on social media. The Kapil Sharma Show: Comedian Shares His Birthday With Guest Remo D’Souza, TKSS Team Celebrates With Special Cakes for the Duo – See Pics!

On Monday night, Kapil threw a birthday bash, which was attended by his close friends like singers Mika Singh, Richa Shukla and co-stars from The Kapil Sharma Show - Sumona Chakravarti, Bharti Singh, Kiku Sharda amongst others. Last night, Kapil, who had organised a musical night for his guests, also took to the photo-sharing app to share a couple of videos from his birthday celebration, where everyone can be seen having a blast at Kapil's birthday bash.

In two of the videos, the powerhouse of talent was seen dancing with the family to the tunes of Mika Singh’s songs, who performed for Kapil on his special occasion. Meanwhile, Kapil's wife Ginni played the perfect host as she was seen taking care of everything at the party. In another video, Kiku Sharda and Bharti Singh were seen trying to match steps with belly dancers and it indeed was a hilarious one. Looks like they all had a ball of a time.

Check Out the Videos Here:

Kapil cut a few cakes with wife Ginni and his mother on his side.

Last night, Kapil had organised a musical night for his guests.

Don't forget to check out Kiku Sharda and Bharti Singh's hilarious video where the two were seen trying to match steps with belly dancers.

On the personal front, Kapil recently tied the knot with Ginni Chatrath in December last year. The couple hosted their wedding in Jalandhar and later celebrated their union in a series of wedding receptions in Mumbai with their closest friends, family members and industry colleagues including Deepika Padukone and Ranveer Singh.

On the professional front, Kapil is currently hosting The Kapil Sharma Show after a brief break. Enthralling and entertaining his audience with the second season of The Kapil Sharma Show, Kapil made sure to top the rating charts and all seems to be well in Kapil's world. Stay tuned to LatestLY for more updates on your favourite celebs.

(The above story first appeared on LatestLY on Apr 02, 2019 03:06 PM IST. For more news and updates on politics, world, sports, entertainment and lifestyle, log on to our website latestly.com).