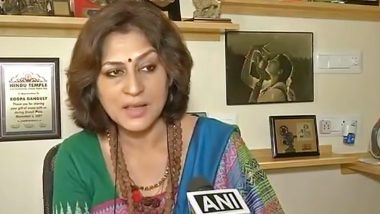 Veteran actress and National Award-winning singer Roopa Ganguly turned nostalgic about the time she sang a song for BR Chopra's tele-serial "Mahabharat". The actress had shot to fame playing Draupadi in the popular mythological serial that is currently being re-telecast after almost 30 years amid the ongoing lockdown. "I sang one song in 'Mahabharat' called 'Naino ke', and it was a beautiful experience. What happened was that the makers were looking for someone to sing the song that was to be picturised on me. (Co-director) Ravi (Chopra) sir suddenly asked me, 'Will you sing a song?' I was quite okay with that and didn't think much of it because I was singing ever since I was a kid. While I agreed, I told Ravi ji that if my attempt at singing was not successful, I was completely fine if they hired a professional singer for the same," Roopa recalled. The Magic of Mahabharat: Pankaj Dheer Reveals That He’s Worshipped as Karna in Two Temples (Read Details)

She added: "Luckily, I sang the song in one take and everyone liked it. It is a lovely song. Today after all these years when I heard the song, I'm happy that I agreed to lend my voice." Incidentally, years later in 2011, Roopa would go on to win a National Film Award as Best Playback Singer for the Bengali film "Abosheshey". She recorded three songs for the film and also starred in it with Raima Sen and Ankur Khanna. Back when she was starting out in "Mahabharat", though, it was not easy for Roopa to be part of the series as she was not well-versed with Hindi at that time. B.R.Chopra’s Mahabharat Tops In 2 Out of 3 TRP Charts This Week, Shri Krishna Also A Hit With The Masses (View BARC Charts)

"I had the most wonderful time playing Draupadi. While it was a challenge for me because I was not so well-versed in speaking Hindi, I made double the effort. The one memory that I have from the time was that I used to be the first one to turn up on the sets. The schedule was very strict back then and we all had to report on time. Ravi ji was very friendly but he also made sure that we follow a disciplined life on the sets. And I had no problem as I would report on the sets way before the 7am deadline. I would be there at 5am," she added. Roopa also recalled how trains used to stop at stations so that people who were travelling could watch the show.

"We had put in a lot of hard work and we were confident that people would like the show. But slowly we got to know about the impact it had on people. We got the news that trains used to stop at stations which had a television so people could watch 'Mahabharat'. "At that time, we were very busy shooting the show, so we never really realized that the show had become such a huge hit. I didn't even get a chance to watch the show properly at the time," Roopa shared. "Mahabharat", produced by BR Chopra, originally ran from 1988 to 1990 on Doordarshan. It is currently seeing a re-run on Colors TV.

(The above story first appeared on LatestLY on May 29, 2020 03:58 PM IST. For more news and updates on politics, world, sports, entertainment and lifestyle, log on to our website latestly.com).