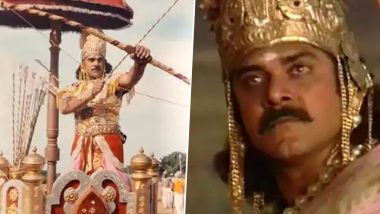 The re-run of the iconic shows from the past is literally making these mythological shows a huge hit on the TRP chart. Besides Ramayan, another show which has garnered a lot of viewership is BR Chopra's Mahabharat. The saga which was initially re-aired on DD Bharati from March 28, is now being aired on three other channels, including Colors TV, Star Bharat and DD Retro. Just like the show, it's characters are also enjoying fame once again. Among them is Pankaj Dheer aka Karna from Mahabharat. While the artist has done many movies, it's his role as the golden-crowned Karna which is remembered by many. Ramayan on Star Plus and Mahabharat on Colors: Here's The Telecast Time and Schedule for the Re-Run of the Doordarshan Shows (View Tweets).

Recently, speaking about the love he has been receiving, Pankaj opened up to Mid-day and revealed how he is worshipped as the almightly in two temples. "People have loved me and adored me over the years. It goes to show that I have merited it. Even in the history books of school, if they have a reference to Karna, they have my picture there. So, as long as these books will be printed in school, I will always be their reference as Karna. I also have two temples where there is Puja done every day. I am worshipped there in Karna mandir. I have been to those temples. One is in Karnal and one is in Bastar," he said.

"There is an eight-feet tall statue of mine, and people come there and worship it. When I go there, people love me from the bottom of their hearts. This goes to show that they have accepted me as Karna," he added. B.R.Chopra's Mahabharat Tops In 2 Out of 3 TRP Charts This Week, Shri Krishna Also A Hit With The Masses (View BARC Charts).

Now, as the show is enjoying renewed viewership, Pankaj expressed its importance in today's times.  "This is one of the most beautifully written Granth. There are 26 relationships between people, and the Mahabharata tackles all the relationships that human beings know of. The most beautiful part of it is that this is the only Granth that teaches you what not to do. When it comes to Mahabharat the show, one should keep in mind that this was a great combination which got created. This was an assembly of great minds," he told to DNA.

Must say, these old shows are now superhit among fans, courtesy the lockdown. Stay tuned to LatestLY for all updates from the TV world.

(The above story first appeared on LatestLY on May 27, 2020 09:06 PM IST. For more news and updates on politics, world, sports, entertainment and lifestyle, log on to our website latestly.com).