He also expressed his disappointment saying that even when Johnny Lever said something on a very similar line, it was only him who was targeted by Krushna. 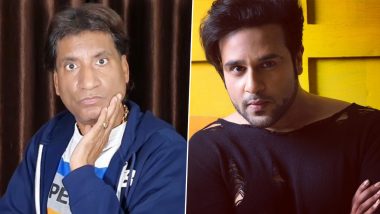 Bharti Singh and husband Haarsh Limbachiyaa's arrest has stirred a big controversy amongst fellow comedians. While Krushna Abhishek expressed his disregard towards Raju Shrivastava's ill comments on Bharti's arrest, Raju has also decided to speak about the issue and respond to Krushna. Bharti Singh No Longer Part of The Kapil Sharma Show? Co-Star Krushna Abhishek Has This to Say on Rumours of Her Dismissal.

It so happened that after Raju's comment on Bharti, Krushna said that the entire team of The Kapil Sharma Show is upset with the comedian for how he disregarded Bharti. He added that he will stand by and support Bharti no matter what. Raju responded to this comment in a rather harsh way.

While talking to SpotboyE, Raju said, "When Krushna says he stands by Bharati, does he mean he defends her for taking drugs? Is that the kind of image that he wants to project of the comedy community, as stands-ups who stand up in defence of drug consumption?”

He went on to add, " “Bharati confessed to the charge and the NCB found drugs on her home. Only then I reprimanded her as an elder member of the comedy fraternity. Should I not pull up a wrongdoer in our community? Should I instead defend the wrongdoers’ deed? Or, have Krushna and Bharati become such big performers that I can’t criticize them? There was a time when I was Krushna’s.” Bharti Singh Waited for Nine Months to be Part of Kapil Sharma's Show.

Raju also said that he stands by whatever he said about Bharti. “Krushna says they are all naraaz with me. Am I to presume that he’s speaking on behalf of all the actors on the show? Or is he lashing out at me and pulling all the others into his arguments? Mujhe toh kissine nahin kaha ke who naraaz hai? And why should they be angry with me? Maine kya ghalat kiya hai? Maine toh Bharati ki bhalai ke liye kaha (I spoke out for Bharati’s good),” added comedian.

He also expressed his disappointment saying that even when Johnny Lever said something on a very similar line, it was only him who was targeted by Krushna. He added, "Let Bharati deny the charge, and I will admit I shouldn’t have spoken.”

(The above story first appeared on LatestLY on Dec 01, 2020 05:25 PM IST. For more news and updates on politics, world, sports, entertainment and lifestyle, log on to our website latestly.com).