Bharti Singh No Longer Part of The Kapil Sharma Show? Co-Star Krushna Abhishek Has This to Say on Rumours of Her Dismissal

It is said that Sony has decided to drop Bharti from the show. While social media is abuzz with these speculations, Bharti's colleague has come out in support of the comedian and quashed these rumours. 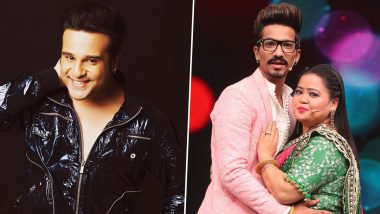 The Kapil Sharma Show's Bharti Singh and husband Haarsh Limbachiyaa came under NCB's radar after the team secured cannabis from their Andheri house and from Haarsh's Versova production house. The NCB had allegedly seized 86.5 gm of cannabis during their search, after which both Bharti and Haarsh were sent to jail. Bharti Singh Arrested By NCB For Consumption of Drugs, Haarsh Limbachiyaa Being Examined: Reports.

Bharti and Haarsh were granted bail soon after their arrest but their trouble seems to increase day by day. It is being rumoured that Bharti Singh, who has made us laugh with her quirky characters for so long, might no longer be a part of The Kapil Sharma Show. It is said that Sony has decided to drop Bharti from the show. While social media is abuzz with these speculations, Bharti's colleague has come out in support of the comedian and quashed these rumours.

Talking to Time Of India Krushna revealed, "I haven’t heard of any such discussion or development from the channel’s end. No such decision has been taken by the channel." he went on to say that even if something like this happens, he will support Bharti. "She should get back to work. Jo ho gaya woh ho gaya (whatever has happened, has happened). We stand by Bharti and both Kapil (Sharma) and I are with her. She has my unconditional support,” Krushna added. Bharti Singh and Haarsh Limbachiyaa Given Judicial Custody Till December 4 In Drug Probe.

Krushna also expressed his regret and revealed that the entire crew of The Kapil Sharma Show is upset with comedian Raju Srivastava for the way he spoke about Bharti's arrest. He added that he considers Bharti as his sister who has stood by him through his life and he will do the same for her.

Kiku Sharda, who essays the role of Baccha Yadav on the show, also reacted to the rumours and said, "I haven’t heard of any talk of her not being a part of the show. She just wasn’t there yesterday at the shoot and that’s about it.”

Kapil Sharma has not yet spoken on this topic.

(The above story first appeared on LatestLY on Nov 30, 2020 12:05 PM IST. For more news and updates on politics, world, sports, entertainment and lifestyle, log on to our website latestly.com).