Samir Sharma Wrote A Long Post About Depression And Sushant Singh Rajput's Death On July 22, Called It 'A Devil That Doesn't Stop Screaming'

We are still coping with everything that is being said, written and alleged about Sushant Singh Rajput's death and then came the news of TV actor Samir Sharma's demise. He had written a long post after the Chhichhore actor's death on depression. 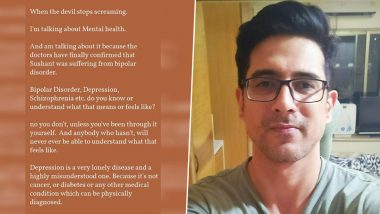 Samir Sharma, one of the popular TV actors, apparently committed suicide today in Malad. The Police is still investigating the case. Many reports suggest he was dead for two days now. Where have you seen this guy? You must have watched him in Yeh Rishta Kya Kehlata Hai recently and was one of the prime characters in the hit Iss Pyaar Ko Kya Naam Doon starring Barun Sobti and Sanaya Irani. So it was a shocker for everyone. It is still uncertain why he took such a step. When we went through his Instagram account we found many landscape photos and a long note written on Sushant Singh Rajput's death. It talks about mental health and depression. Samir called it the devil that doesn't stop screaming in your head. Sameer Sharma, Yeh Rishtey Hain Pyaar Ke Actor, Dies By Suicide

Samir asserts his point that he is speaking about Sushant's suicide because it has been confirmed now. He speaks about how depression could be much more fatal than even cancer. His post requests people to take help if they feel something is eating them. He wanted depression to not be a misunderstood condition.

Read this if you cared about Sushant Singh Rajput.

Post Sushant's death, a lot of people spoke about mental health and Samir was one of them. We wonder what made him take such a fatal step.

(The above story first appeared on LatestLY on Aug 06, 2020 02:39 PM IST. For more news and updates on politics, world, sports, entertainment and lifestyle, log on to our website latestly.com).