Arjun Kapoor, Rakul Preet, and Neena Gupta-starrer Netflix film Sardar ka Grandson have received a not-so-great response from the critics. Check it out. 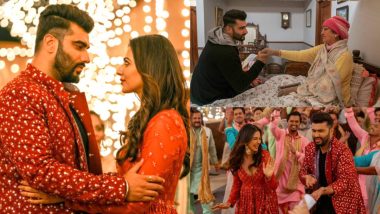 Arjun Kapoor and Rakul Preet's film Sardar Ka Grandson is finally out on Netflix. With a premise that's catchy and also stars the terrific Neena Gupta in a key role, is this Kaashvie Nair directorial worth the watch? Well, let's find out. Based on the storyline of how a grandson can go to any extent in order to fulfill his grandmother’s wish, the movie definitely seems a heartwarming tale. Also, the early reviews of the flick are out and going by it Sardar Ka Grandson has failed to impress. Here, check out what critics have to say about the film. Sardar Ka Grandson Movie Review: Neena Gupta Turns Saviour in Arjun Kapoor and Rakul Preet’s Half-Baked Netflix Film (LatestLY Exclusive).

Tagging the film yawn-inducing, NDTV writes, "Sardar Ka Grandson isn't as bad as Drive or Mrs. Serial Killer. But that isn't saying much. The very fact that we are even thinking of these two titles by way of comparison should be enough of a warning nudge. What should you expect from Sardar Ka Grandson? Little."

Scroll pens, "The actual relocation of Sardar’s two-storeyed house, which should have been the highlight, is hurriedly depicted with the aid of basic visual effects. All energies are focused on Amreek’s fish-out-of-water adventures in Lahore and Sardar’s antics back home."

The Quint gives it one star and adds, "Sardar Ka Grandson commits the biggest sin! It’s boring. Very boring. A spicy kick of genuine drama and entertainment would have helped make it palatable." Sardar Ka Grandson: Rakul Preet Singh Opens Up About Her Role in Arjun Kapoor’s Netflix Film.

Deccan Herald calls it a disappointment and says, "The film could still have made an impact had the writing done justice to the intriguing premise. Generally speaking, films revolving around relationships can work only if they have well fleshed-out characters and a strong emotional core. Sardar Ka Grandson, unfortunately, has neither."

TOI writes, "Sardar ka Grandson tells a fresh story that has its heart in the right place. It attempts to highlight the emotional connect that runs deep between the two countries, but not all of it hits home."

Well, after going through the above reviews, we feel that SKG can be skipped.  To note, all the critics have mostly mentioned that the actors in the film have done a great job and the problem lies in the execution. Stay tuned!

(The above story first appeared on LatestLY on May 18, 2021 01:54 PM IST. For more news and updates on politics, world, sports, entertainment and lifestyle, log on to our website latestly.com).