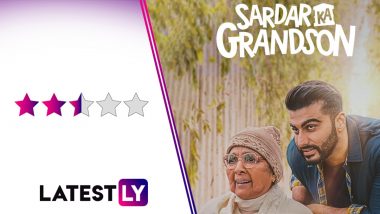 Sardar Ka Grandson Movie Review: In Kaashvie Nair's Sardar Ka Grandson, we have Neena Gupta as 'Sardar' and Arjun Kapoor as her Grandson. Neena Gupta plays a stubborn nonagenarian Rupinder Kaur, who is not only a Sikh but also the head of her family and the founder of Champions Cycle business, hence she is affectionately called 'Sardar'. She wishes to visit Lahore before she dies, where in her younger days, her husband Gursher Singh (John Abraham, decent cameo) had built a house for her. However, the partition riots not only made her lose her home but also snatched her husband away from her. Sardar Ka Grandson: Rakul Preet Singh Opens Up About Her Role in Arjun Kapoor’s Netflix Film.

Her grandson Amreek (Arjun Kapoor, amiable even if stiff in places), settled in US, is a clumsy fellow who loses both his company and his girlfriend Radhalakshmi (Rakul Preet, quite good) over his lackadaisical attitude. Over learning that his grandmother is stricken with cancer, he returns to India, where his 'sardar' reiterates her wish to visit Lahore. When her visa gets rejected, now it is upto Amreek to fulfil her wish by bringing the house to her.

Sardar Ka Grandson, that is written by Anuja Chauhan, Amitosh Nagpal and Kaashvie Nair, has a cutesy story of a loved one who moves mountains, in this case a mansion, to bring happiness to his grandparent. The scenes between Arjun and Neena Gupta have enough warmth in them to make their camaraderie so enjoyable to watch. Neena Gupta. especially, is in such command of her performance, even though her makeup isn't always convincing. She becomes a major reason to check out Sardar Ka Grandson. In her younger role, Aditi Rao Hydari is also quite charming.

However, it take more than an hour for Sardar ka Grandson to get to its main plotpoint - shifting the house from Pakistan to India. I was also a little curious that Amreek didn't know that his company in US used to shift houses. No matter how bad he was at his job, he shouldn't be that daft to not know the kind of services his moving company does.

Anyway, let's assume he is that thick. Still, apart from some of the grandma-grandson bonding scenes, Sardar Ka Grandson only truly heats up the proceedings once Amreek lands in Lahore and faces one complication after another there. However, none of the problems he faces are something we need to lose our sleep on, as being unpredictable is not the screenplay's best gift. The character of a pissed-off Mayor (Kumud Mishra) feels more like a shoehorned antagonist needed only to create fake tension. Which is silly since the plotline in itself doesn't need any faux problems to add tension. OTT Releases of the Week: Arjun Kapoor's Sardar Ka Grandson and Zack Snyder's Army of the Dead on Netflix, Tamannaah Bhatia's November Story on Disney+ Hotstar and More.

And to top it all, there are even forced attempts to amplify humour, which is already loud, that includes a sequence of people running and jumping around throwing a key at each other. Priyadarshan-style. Maybe this is the Mallu in the filmmaker paying a tribute to the King of Comedy, though the attempt felt quite flat and unnecessary.

Still, Sardar Ka Grandson does have a lovely conclusion that you expect from this kind of fare. Though I do have a feeling that it would have made a better impact if there were more scenes of a young Rupinder and Gursher.

Which reminds me, there was one line in the film that did leave me with an emotional impact. When in Lahore, Amreek asks a young Pakistani boy, how a tea-seller like him can help him out. To which, the boy retorts that Amreek's country keeps undermining chaiwallahs. Ya, we did. We surely did!

Sardar Ka Grandson serves a few heartwarming moments and it benefits from Neena Gupta's presence, despite being slandered by a very okayish narrative. The movie is streaming on Netflix.

(The above story first appeared on LatestLY on May 18, 2021 12:41 PM IST. For more news and updates on politics, world, sports, entertainment and lifestyle, log on to our website latestly.com).