The Railway Police on Thursday said that it has arrested three drug peddlers, all residents of Odisha with 51 kg of ganja worth Rs five lakh from New Delhi, which was to be supplied to Jammu. 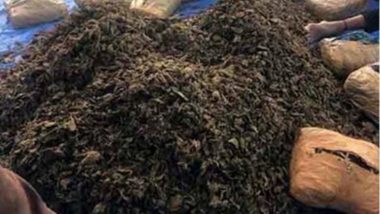 New Delhi, June 17: The Railway Police on Thursday said that it has arrested three drug peddlers, all residents of Odisha with 51 kg of ganja worth Rs five lakh from New Delhi, which was to be supplied to Jammu.

Harendra K. Singh, DCP Railway Police said that with the arrest of two men and one woman involved in the transportation of contraband ganja, the staff of PS New Delhi Railway Station has busted a gang of drug peddlers involved in drug trafficking in Jammu.  Delhi Police Raid Four Illegal Hookah Bars; 29 Arrested

He said that the arrested persons have been identified as Ranjit Kumar, Swadhina Bisoyi, both residents of Odisha's Ganjam district and Sachala Nayak, a resident of Odisha's Kandhamal district.

Singh said that police on Wednesday around 11 a.m. during routine checking at New Delhi Railway Station, found three suspicious persons near foot over bridge on platform 12-13. They had arrived in Delhi from Bhubaneswar.

He said that they were carrying two bags. When asked to show what is inside the bags, they declined.

"On strong suspicion, they were brought to the New Delhi Railway Police station. During sustained interrogation, they admitted that they were carrying ganja in their bags," the DCP said.

As per the procedure, their bags were opened and it was found that a total of 51 Kg contraband Ganja was stuffed in the two bags.

He said that during interrogation, they admitted that they are involved in transportation of contraband ganja from Odisha to Delhi.

Singh said that Ranjit revealed that he does farming and during COVID-19 pandemic he came into contact with one Kuna who asked him to deliver the contraband item at various places.

While Nayak also said that she belongs to a very poor family. During COVID-19 pandemic she came into contact with her relatives Bisoyi and Ranjit who asked her to work with them to deliver contraband items at various places. She used to take Rs 5,000 for delivery of these contraband items from team leader Ranjit, Singh added.

(The above story first appeared on LatestLY on Jun 17, 2021 07:10 PM IST. For more news and updates on politics, world, sports, entertainment and lifestyle, log on to our website latestly.com).