Delhi Police on Thursday said that it has apprehended 29 people, including four cafe owners in its crackdown against illegal hookah bar. R.P. Meena, Deputy Commissioner of Police (DCP) south east Delhi, said that the staff of Kalkaji police station apprehended twenty five customers and four owners from cafe and bars. 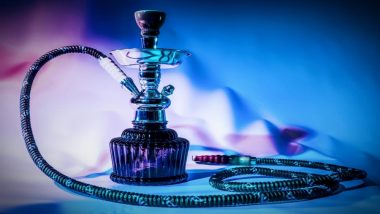 New Delhi, June 17: Delhi Police on Thursday said that it has apprehended 29 people, including four cafe owners in its crackdown against illegal hookah bar.

Meena said, four hookahs have also been seized from their possession.

The DCP said that on June 12 during area patrolling, a police team reached near Govindpuri extension. The team noticed that one Cafe -- Sound & Fog was running and several customers were enjoying hookah inside the bar.

He said the team raided at Sound & Fog cafe and apprehended the owners, Monu and Rohit, along with five customers.

The DCP said that a case was registered under several sections of the IPC, Epidemic Diseases Act, Disaster Management Act and COTPA Act.

He said that one flavoured hookah was recovered from their possession.

Meena said, "During the course of investigation, the accused persons were apprehended and the recovered hookah was seized."

He further said that on June 14, police received a tip off that an illegal hookah bar was running in a cafe near Gol Chakkar, Kalkaji.

"A police team raided at the Khana Badosh Cafe near Gol Chakkar, Kalkaji. On checking, it was found that several persons were enjoying the hookah inside the Cafe. Twenty customers and two cafe owners were arrested and three hookahs were seized from the spot," he said.

The DCP said that the owners of the Cafe were identified as Karan Nayyar and Aditya Dixit. Consequently, a case was registered against them too.

(The above story first appeared on LatestLY on Jun 17, 2021 05:51 PM IST. For more news and updates on politics, world, sports, entertainment and lifestyle, log on to our website latestly.com).