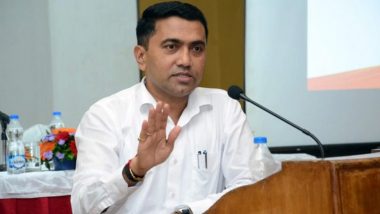 Sawant on Friday said a police complaint had been filed in the matter but the man targeted by the hackers, Pramesh Asolkar, said he is still in shock that the state Chief Minister's social media account had been tapped into.  Goa CM Pramod Sawant Urges Schools To Be Alert After Teenager Arrested for Allegedly Raping 15-Year-Old Girl in Bicholim

The hacker himself posed as Sawant and requested Asolkar to immediately send across Rs 30,000 which would be returned in two hours.

"At nearly 9.30 p.m. Thursday night, I received a friend request notification from Pramod Sawant. The profile had the Goa Chief Minister's photo and lotus symbol of the Bharatiya Janata Party (BJP). I was sure it was genuine," Asolkar added.

It was only when the hacker asked him for money that Asolkar realised that something was amiss.

"People need to be careful with their social media accounts, especially when the Chief Minister's account itself has been hacked," Asolkar said.

(The above story first appeared on LatestLY on Jul 16, 2021 05:50 PM IST. For more news and updates on politics, world, sports, entertainment and lifestyle, log on to our website latestly.com).