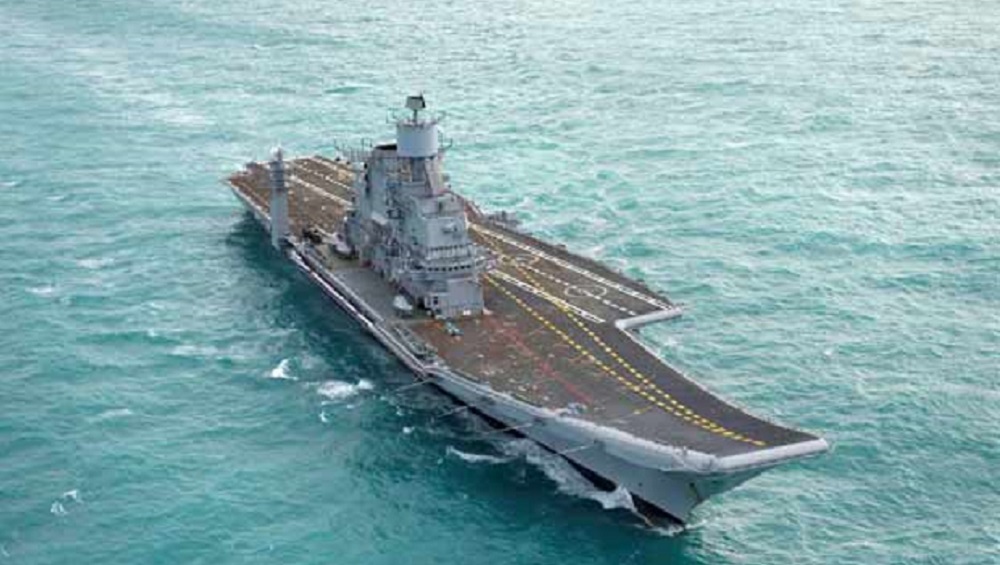 New Delhi, January 10:  India has deployed its aircraft carrier INS Vikramaditya in the Arabian Sea at a time China and Pakistan are holding a nine-day mega naval exercise in the region, a move seen as New Delhi sending a clear signal to its two neighbours. Top officials of the Naval headquarters were on board the aircraft carrier when it was deployed in the strategic mission earlier this week, military sources told PTI. Indian Navy Launches 4th Scorpene-Class Submarine Vela in Mumbai.

Pakistan and China on Monday launched a major drill in the North Arabian Sea with an aim to increase inter-operability and strategic cooperation between their two navies. The exercise 'Sea Guardians' is taking place in the midst of heightened tension between India and Pakistan over the Kashmir issue. Key platforms of both China and Pakistan, including submarines, destroyers and frigates, are part of the exercise. Indian Navy Launches Awareness Program About Coastal Security in Maharashtra.

Aircraft carrier INS Vikramaditya, with MiG29K fighters on board, has been sent with a strategic objective, the sources said without elaborating.

A Navy spokesperson said Deputy Chief of Naval Staff M S Pawar reviewed INS Vikramaditya's operations in the Arabian Sea. The deputy chief was extremely pleased to witness the "intense air operations" with high levels of motivation and will to win that were evident on-board the "Queen of the Battle", the spokesperson said.

He expressed confidence that INS Vikramaditya will "live up to the name and remain victorious in battle - always", the spokesperson added.

China has been expanding its presence in the North Arabian Sea and is developing Pakistan's deep water Gwadar port in the region. Indian Navy on Standby to Evacuate Indians From Gulf if Tensions Between US & Iran Escalate: Report.

Gwadar is being connected through the over USD 60 billion China Pakistan Economic Corridor (CPEC) to China's Xinjiang province, providing a key land route to China to access the warm waters of Arabian Sea.

The Arabian Sea provides entry to the Indian Ocean where China has built a logistics base at Djibouti in the Horn of Africa. In September, the Indian Navy drove out a Chinese PLA ship from India's Exclusive Economic Zone and had warned that such activities will be dealt with sternly.

The INS Vikramaditya, commissioned into the Indian Navy in November 2013, is considered one of the top rated aircraft carriers globally. The Russian-origin ship is often called a floating airfield. The 44,500 tonne is about 284-m-long and its height is around 60 m, which is like a 20 storeyed building from keel to the highest point. The ship has a total of 22 decks and it has the ability to carry over 30 aircraft comprising an assortment of MiG 29K/Sea Harrier, Kamov 31, Kamov 28, Sea King, ALH-Dhruv and Chetak helicopters.