Gujarat has been witnessing a tough battle between the incumbent BJP and Congress for a while. But things got spiced up this polling season with the entry of the Arvind Kejriwal-led Aam Aadmi Party (AAP). 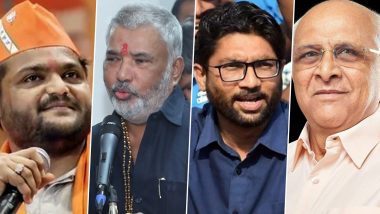 Surat, Wednesday 23: The stage is all set for the Gujarat Assembly Election 2022, and all the contesting parties are putting their all in to claim victory. Gujarat has been witnessing a tough battle between the incumbent BJP and Congress for a while. But things got spiced up this polling season with the entry of the Arvind Kejriwal-led Aam Aadmi Party (AAP). Gujarat Assembly Elections 2022: From Rivaba Jadeja to Paresh Dhannai and Isudan Gadhvi, List of Key Candidates and Constituencies Going to Polls in First Phase.

As the date of polling nears, BJP is campaigning aggressively with PM Narendra Modi, and Amit Shah holding rallies in Gujarat in the past few days. Rahul Gandhi also took a break from his Bharat Jodo Yatra to address a rally in the poll-bound state.  Some big names in Gujarat politics will be going testing their prowess in Gujarat. Patidar leader Hardik Patel is contesting the Viramgam constituency on a BJP ticket. While Congress has fielded Jignesh Mevani from the Vadgam seat. Gujarat Assembly Elections 2022: 50-Odd Unrecognised Parties To Contest Polls.

Hardik Patel, a Patidar leader, will be contesting the Viramgam assembly constituency, which is part of the Ahmedabad district. Patel will face tough competition from Congress' Lakhabhai Bharwad and AAP's Kuvarji Thakor.

Jignesh Mevani, a lawyer-activist, and former journalist, has been given Vadgam constituency for the second time. He will be pitted against Dalpat Bhatiya of AAP and Manibhai Jethabhai Vaghela of

Congress has shown belief in Ashokbhai Patel for the Surat North assembly seat. He is up against BJP's Kantibhai Ballar and AAP's Mahendra Navadiya.

Manoj Sorathiya, a key player in building AAP in the state, is up from the Karanj assembly seat. Congress has fielded Bharti Prakash Patel from the seat while BJP has named Pravinbhai Ghoghari.

Chief Minister Bhupendra Patel has been fielded again from the Ghatlodiya constituency in Ahmedabad (West). BJP has also named Patel as the chief ministerial candidate.

Aslam Cyclewala, a businessman, is Congress' face from the Surat East assembly seat. Cyclewala will be facing AAP's Kanchan Jariwala and BJP's Arvindbhai Rana in a close-knit battle.

The Gujarat Assembly elections 2022 will be held in two phases on December 1 and December 5. Voting for 89 seats of the Assembly will take place in the first phase while for the rest 93 in phase two. The votes will be counted on December 8.

(The above story first appeared on LatestLY on Nov 23, 2022 04:15 PM IST. For more news and updates on politics, world, sports, entertainment and lifestyle, log on to our website latestly.com).