Driven by the pandemic-induced stay-at-home orders, the Indian online smartphone market is likely to cross 50 per cent in the April-June quarter, which is a first for any second-quarter ever in the country, a new report said on Thursday. 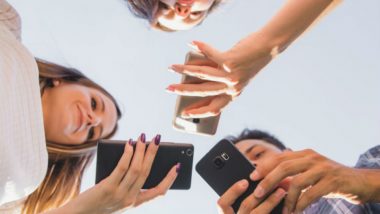 New Delhi, July 22: Driven by the pandemic-induced stay-at-home orders, the Indian online smartphone market is likely to cross 50 per cent in the April-June quarter, which is a first for any second-quarter ever in the country, a new report said on Thursday. The 5G smartphone shipments were up from 7 per cent in Q1 2021 to 15 per cent in the second quarter, as nearly every player doubled down on launching 5G-ready affordable devices.

"Both April and May were better than expected as we have already mentioned that smartphone market stays resilient and we have seen a strong pent-up demand in June," according to CounterPoint Research. However, there was also a pressure of supply chain shortage that global market is facing, and India was not immune to that as well. Apple Doubled Its Smartphone Market Share for the First Time in India in Festive Quarter of 2020.

Owing to this, the smartphone market in Q2 may be 14-18 per cent down from the same quarter last year, the data showed. "Overall, we believe market will exhibit a health year-on-year (YoY) growth as last year, half of Q2 was literally washed out," Counterpoint said. The smartphone players are bullish on launching 5G-ready devices for the masses in India.

Smartphone brand realme announced earlier this month that it aims to bring 5G smartphones in the the sub-Rs 10,000 segment to the Indian users next year, with the support of the chipset manufacturers and other industry partners.

"realme aims to be the 5G leader and believes that every Indian deserves a 5G phone from 2021 onwards. We are spearheading 5G's democratisation in India and globally, and through our 5G smartphones we will constantly bring more leap-forward surprises and the best in market experience to more Indian consumers," said Madhav Sheth, Vice President, realme and CEO, realme India and Europe.

Counterpoint Research revealed during the virtual 5G event that almost 14 per cent of the smartphones sold in May in India were 5G devices. "There are a number of market and technology factors which will make the transition from 4G to 5G the fastest among all generations. There is the anticipation of massive performance boosts in download speeds and step-change feature set improvements across imaging, processors and battery life," Tarun Pathak, Research Director, Counterpoint Research, had said during the event.

(The above story first appeared on LatestLY on Jul 22, 2021 02:39 PM IST. For more news and updates on politics, world, sports, entertainment and lifestyle, log on to our website latestly.com).