As per the state transport department latest statistics in next two to three months the bikes and scooters will cross 20 lakh mark in the state. 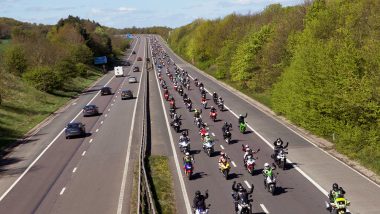 Mumbai, April 23: The Maharashtra state transport department is worried with the rising number of bikes and scooters. Therefore, it has decided to start road safety campaigns to ensure riders follow proper rules and wear helmets to avoid fatal accident mishaps. According to the newspaper report in the Times of India (TOI), as per the state transport department latest statistics in next two to three months the bikes and scooters will cross 20 lakh mark in the state. Currently, the number of two wheelers on city roads is growing at an alarming pace, with nearly 1000 bikes for every kilometre of road in Mumbai alone.

Shekhar Channe, the state transport commissioner told TOI that they will deal with the situation by creating general awareness on safe driving, aspects of traffic rules and habits like wearing helmets. Meanwhile, the statistics released by the state transport department shows that the bike density was 522 per KM of road in the year 2010-11. While this has gone up by more than 85 per cent in last seven years. Also, nearly 12 lakh two wheelers were registered in the past one decade.

(The above story first appeared on LatestLY on Apr 23, 2018 07:16 PM IST. For more news and updates on politics, world, sports, entertainment and lifestyle, log on to our website latestly.com).