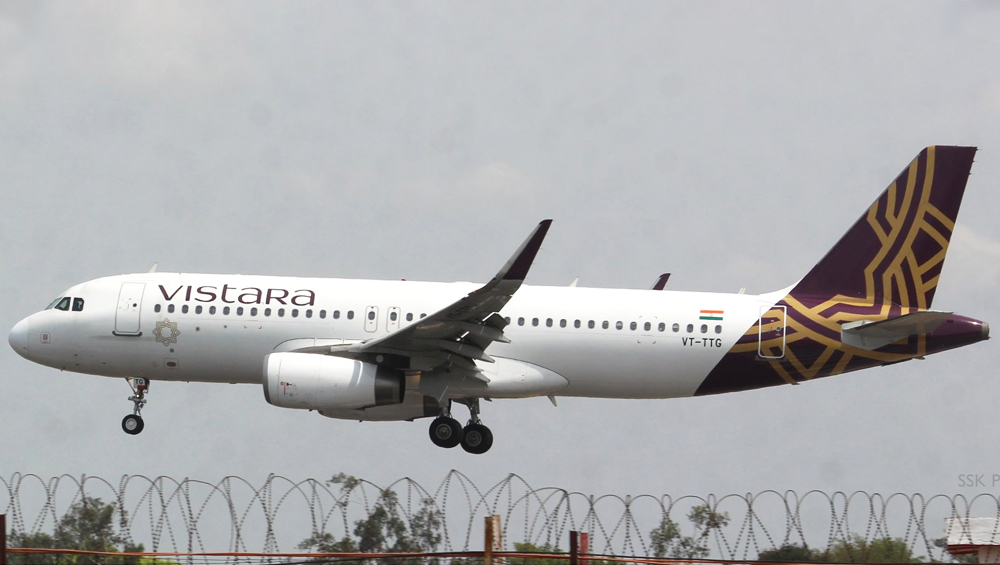 New Delhi, September 15: Vistara is planning a complete revamp of its frequent-flyer programme "Club Vistara" by increasing the number of partner companies across different segments and moving to a dynamic award-pricing system, a top airline official has said.

Under the proposed dynamic system, a seat will always be available for member-passengers in exchange for points and it will also allow members to earn and use points to book seats across all partner companies, the official said. Air Vistara Expresses Regret After Recalling Snag-Hit Hyderabad-Bound Flight UK-869 to Mumbai Airport, Arranges Another Aircraft.

However, Club Vistara currently has just two airline partners — Singapore Airlines and Silk Air, but it has seven other partners across other segments. Moreover, member-passengers can earn points by using services of any of the partners, the points earned can only be spent to purchase tickets on Vistara or other airline-partners.

"The new way that some airlines have moved is that they don't publish the award chart... There, the number of points that are required for booking a seat are dynamically prepared," Vistara's Chief Commercial Officer Sanjiv Kapoor told PTI. "For example, a ticket on Saturday afternoon may be available for 7,000 points but the same ticket for Monday morning would be for 30,000 points. The benefit of this dynamic system is that a seat is always available in exchange for points," Kapoor explained.

"We are currently evaluating what system would be best for us moving forward," Kapoor said. Any kind of dynamic award-pricing system requires advanced software in the back-end. "The IT work required as well the revenue management required is quite a lot. It is complicated," the Vistara CCO said.

The full-service Vistara airline is a joint venture between Tata Sons (51pc) and Singapore Airlines (49pc). At the moment, Club Vistara has about 1.6 million members. Currently, Axis Bank is Club Vistara's co-brand credit-card partner, Avis is car-rental partner, booking.com is hotel partner and The Economist is its publishing partner.

"Over the coming weeks and months, you would be seeing us roll out a number of new partnerships. It would be not only airline partners, it would be partners across different segments," Kapoor said. He also said members would soon be able to "earn and burn" the points across all the partners and Club Vistara is moving in that direction.

In early days, Kapoor said, when the airline had just 10-15 aircraft, getting partners were not easy as Vistara was not "big enough for them to put in the investment". He said even though the airline has overall 6 per cent share of the domestic air passenger market, it has around 30 per cent and 20 per cent share in primary urban centres such as Delhi and Mumbai. "In these two cities, we are significant players," Kapoor said.

The airline is expanding internationally and it is planning to start flights to destinations such as Tokyo and London once it starts inducting wide-body aircraft Boeing 787-8 Dreamliner from February 2020 onward. Kapoor said the number of Club Vistara members would increase but it would be a function of how well the members can be served.

"We just want to make sure that we become so greedy in getting the numbers that we dilute the value proposition for them," he said. On August 7, in Singapore, the airline's Chief Executive Officer Leslie Thng talked about the plans to turn Club Vistara into a lifestyle programme from a frequent-flier programme.

"We are part of the Tata group. There are a lot of opportunities that we can work within the Tata group of companies. If we can make the FFT (frequent-flyer programme) relevant and effective for Indian consumers, I think it will be the USP for us to compete against the middle-eastern carriers, even Singapore Airlines," he said.

Amid a tough operating environment, Vistara's losses doubled to Rs 831 crore in 2018-19. However, earlier this month, its two promoters infused Rs 500 crore in it to keep it expanding internationally and domestically.