The airline categorically denied any conjecture of stake sale, calling it misreporting by a section of the media 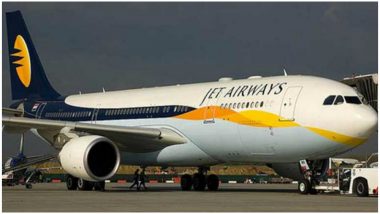 Mumbai, August 22: Jet Airways is going through a tough time, and there are various reports from the airline asking employees to go for a pay cut to not being able to operate beyond 60 days.  According to a recent Times of India report, the airline is likely to start selling meals and beverages in economy class of some of its domestic flight, to reduce cost.

The cash-strapped airline is all set to discuss ways to reduce costs and turnaround plan when its board of directors meets on August 27, Jet Airways said in a BSE filing. According to the report, the airline is working on a plan that includes cutting down the high sales, distribution and employee costs. Jet Airways Postpones Plan to Cut Salaries of Employees Up to 25% After Protests From Pilots, Commanders

The airline had postponed announcing the earnings for the April-June 2018 quarter (Q1), however, the airline in a recent statement to the BSE has said that the results will be discussed at Monday's board meeting. The airline has been in the news lately for struggling to cope with financial stress. A few days back, there were reports that the airline will not be able to operate beyond 60 days unless the employees go for a pay cut. However, earlier this month, the airline postponed their plans to cut salaries up to 25 per cent of its non-management staff, after protest from pilots, and commanders.

The private carrier had issued a clarification calling them malicious. The airline categorically denied any conjecture of stake sale, calling it misreporting by a section of the media. In the statement issued by the company's CEO Vinay Dube, he said the carrier is only aiming to enact steps which would cut down costs and maximise revenue.

(The above story first appeared on LatestLY on Aug 23, 2018 04:49 PM IST. For more news and updates on politics, world, sports, entertainment and lifestyle, log on to our website latestly.com).