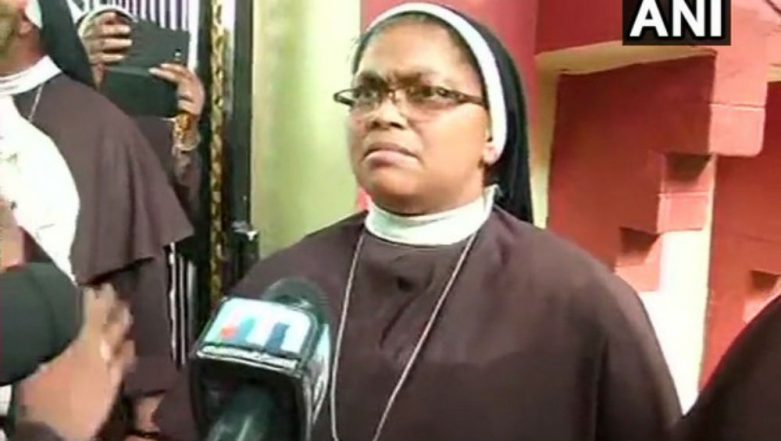 New Delhi, Sept 26: A delegation of 15 nuns from Jalandhar's Missionaries of Jesus met Kerala Chief Minister Pinarayi Vijayan in Delhi on Wednesday over the arrest of former Bishop of Jalandhar, Franco Mulakkal, who is accused of raping a nun from Kerala. After meeting the Kerala Chief Minister, Sister Amala of the Missionaries of Jesus claimed that Mulakkal was falsely framed in the case. "The investigation is biased and partial and we hope the Chief Minister acts. Bishop Franco Mulakkal has been falsely framed in this case," said Sister Amala. On Monday, the sister of the complainant in the rape case of the Kerala nun had filed a petition stating that she and her family are receiving life threats and thus require protection for life and property. Missionaries of Jesus Nuns Meet Kerala CM; Allege Harassment by Probe Team.

On September 22, Mulakkal was sent to a police custody, after being produced before the magistrate court. He has been sent to judicial custody till October 6 by the Pala Judicial Magistrate Court in Kerala's Kottayam. The senior Catholic priest is facing allegations of raping the nun repeatedly between 2014 and 2016 and was arrested in Tripunithura on September 21 after three days of questioning. The clergyman has denied the charges of sexual misconduct. Bishop Franco Mulakkal Sent to Jail, Bail Hearing on Thursday.