A person suffered injuries as communal violence broke out after a group of people attempted to install Lord Hanuman's idol near a Muslim shrine in Madhya Pradesh's Neemuch district, police said on Tuesday. 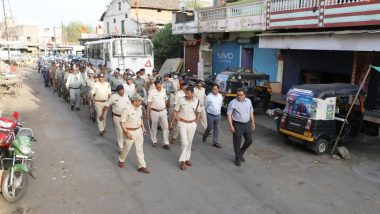 Bhopal, May 17:  A person suffered injuries as communal violence broke out after a group of people attempted to install Lord Hanuman's idol near a Muslim shrine in Madhya Pradesh's Neemuch district, police said on Tuesday.

Private properties were also damaged in the incident, it said.

Section 144 of the Code of Criminal Procedure had to be clamped to stem the violence after a mob pelted stones and resorted to arson near Purani Kachehri area of Neemuch. Additional forces have been deployed and people's movement is being monitored to ensure that the situation returns to normal, a police official said. Lucknow to be Renamed? UP CM Yogi Adityanath's Tweet Sparks Debate

Stones were pelted which prompted police to use teargas to disperse the stone-pelting mob. People have been asked to stay at their homes till the situation gets back to normal. Madhya Pradesh: Section 144 Re-Imposed in Riot-Hit Khargone District; No Rallies, Processions, Jagarans, Shobha Yatras, Political Rallies Allowed Till July 10

"A group of people tried to install the idol on a government land near the dargah which was opposed by the other group. A heated argument preceded the stone pelting," said the district police superintendent.

As per the police, a person identified as Yousuf was injured in the violence and has been admitted in a government hospital. "Additional cops have been deployed in the area and we are monitoring the situation. No complaint was registered so far, but the police have started investigation into the matter," Verma added.

District Collector Mayank Agrawal said: "Section 144 was imposed and the situation is now under control."

Violence in Neemuch was the fourth such incident in Madhya Pradesh in the last two months and the state's Bharatiya Janata Party (BJP) government has drawn flak over it.

(The above story first appeared on LatestLY on May 17, 2022 02:40 PM IST. For more news and updates on politics, world, sports, entertainment and lifestyle, log on to our website latestly.com).