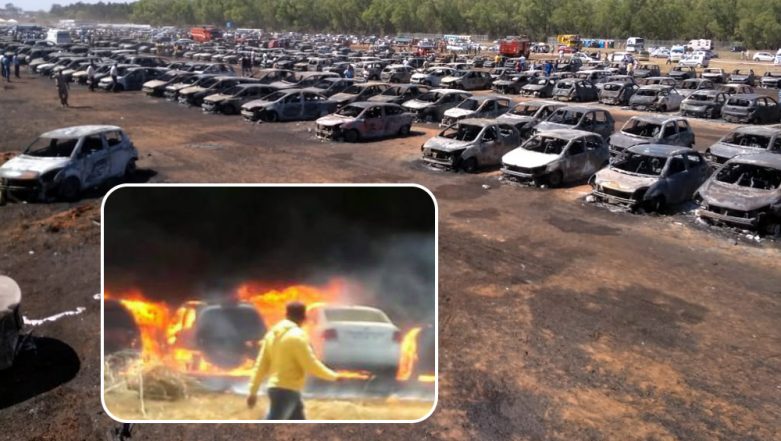 Bengaluru, February 23: In an unfortunate incident, as many as 300 vehicles have been gutted after a massive fire broke out at the parking lot of Bengaluru's Yelahanka Air Force Station, where the Aero India 2019 show is being held. Aero India 2019: PV Sindhu Flies LCA Tejas at Bengaluru Air Show (See Pics).

Reports say that a cigarette butt was thrown on the parking lot which led to the fire on Saturday afternoon. The burnt vehicles were parked near gate 5.

A video doing rounds on social media showed the scale of destruction caused due to the fire.

Watch the Video of the Fire and the Rescue Operations in the Tweet Below:

The air show had to be temporarily halted after the incident, said reports. Fire tenders were rushed to the spot.

Huge plumes of smoke were seen arising from the parking lot where cars burnt to ashes. Today, Saturday is the fourth day of the Aero India 2019 air show. The Aero Show 2019 began on February 20, 2019. A court of inquiry has been ordered into the fire, said a press release by the Ministry of Defence.