Agnipath Scheme Might Not Have Come if Chief of Defence Staff General Bipin Rawat Would Be Alive, Says Congress Leader Kanhaiya Kumar

"Agnipath scheme might not have come if Chief of Defence staff General Bipin Rawat would be alive," he claimed. 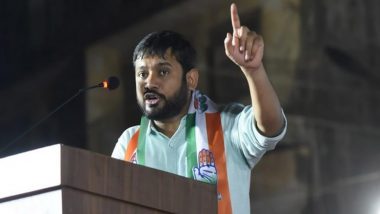 Patna, June 26: Congress leader Kanhaiya Kumar on Sunday slammed PM Narendra Modi over the Agnipath scheme of defence recruitment, saying that his government was playing with the future of youths.

"The future of youths of the country has become darker after the implementation of this scheme. Moreover, it would have big consequences in future. The security of the country will be compromised through this scheme. Maharashtra Political Crisis: We Are Ready to Lay Down Our Lives to Protect Balasaheb's Ideology, Says Eknath Shinde; Supreme Court To Hear Rebel MLA’s Plea Against Disqualification Notices Tomorrow.

"The scheme was announced by Defence Minister Rajnath Singh. After massive protests, this government has brought defense chiefs to defend the scheme and explain its benefits... defence experts are claiming that the Centre has stopped the recruitment of permanent personnel and they will take the services of 'Agniveers' (as scheme beneficiaries are to be called) instead. This is an extremely dangerous practice...," Kanhaiya Kumar said at the party headquarters here.

"Agnipath scheme might not have come if Chief of Defence staff General Bipin Rawat would be alive," he claimed.

"You would remember when the Narendra Modi government had imposed demonetisation in the country. He had sought only 50 days to restore normalcy in the country... at that time what happened. He went to Japan. After the Agnipath scheme, we have learnt that he is in Germany. Every time he comes with the wrong policies in the country and goes for the world tour like Vasco De Gama," he said.

"The Congress is always on the side of defence reform in the country but the NDA government is mowing the dreams of patriots who want to serve the country," he added.

"The Agnipath scheme has not been implemented on the ground but a couple of amendments have already been made so far. The Congress stands alongside youths of the country. Any movement if run on the path of truth and non-violence, it always becomes victorious but is violence came into any movement, people would defame it. The way farmers of the country did the non-violent agitation and became victorious, the center would roll back this Agnipath scheme as well. The non-violent agitation will continue in the country," Kanhaiya Kumar said.

State Congress chief Madan Mohan Jha said: "We will start Satyagraha in all 243 Assembly constituencies in Bihar from 10 a.m. to 3 p.m. on Monday. We have appealed to youths of the state to participate in the Satyagraha. As the monsoon session is underway, the MLAs and MLCs will protest in and outside Vidhan Sabha."

(The above story first appeared on LatestLY on Jun 27, 2022 08:08 AM IST. For more news and updates on politics, world, sports, entertainment and lifestyle, log on to our website latestly.com).