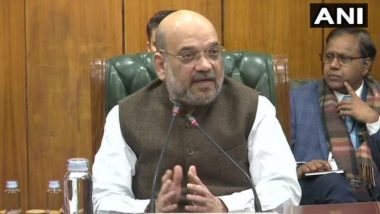 The Union Home Minister in a tweet stated that he got himself tested for COVID-19 after showing symptoms of the virus. Shah added that he was admitted to the hospital on the advice of doctors. He also asked people who came in contact with him in the past few days to get themselves tested and to go into home isolation.

After the news surfaced, Bharatiya Janata Party (BJP) leaders wished for speedy recovery of the Union Home Minister. Last month, Shah held series of meeting the Delhi government to bring COVID-19 situation under control in the national capital.  Shah was also one of the invitees of the Ayodhya Ram temple Bhoomi Pujan which is scheduled to take place on August 5.

(The above story first appeared on LatestLY on Aug 02, 2020 04:54 PM IST. For more news and updates on politics, world, sports, entertainment and lifestyle, log on to our website latestly.com).