The deceased's kin believes that Poornima was murdered by her in-laws as there were injury marks on her body. 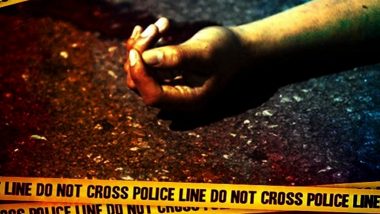 Vijaywada, May 29: In a shocking incident, a 37-year-old woman was found dead under mysterious circumstances on Friday. The deceased was a resident of Benz Circle, where she lived with her husband and in-laws.

As per the report published in the Times of India, the deceased woman was identified as Meda Poornima, married to Janaki Ramaiah 10 years ago. The deceased's parents claimed that Poornima's husband and in-laws were demanding an additional dowry and they pressured her to transfer all her assets to Janaki. Bihar Shocker: Man Sets Wife, 3-Year-Old Minor Son on Fire for Dowry in Supaul District.

As per the reports, the deceased's kin believes that Poornima was murdered by her in-laws as there were injury marks on her body. A further probe into the matter is underway.

(The above story first appeared on LatestLY on May 29, 2022 03:24 PM IST. For more news and updates on politics, world, sports, entertainment and lifestyle, log on to our website latestly.com).