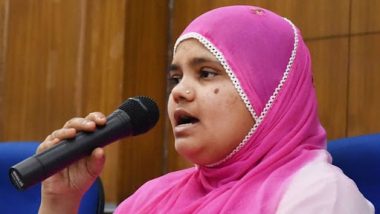 New Delhi, November 30: Bilkis Bano has moved the Supreme Court against the release of 11 men convicted of gang-raping her in the 2002 Gujarat riots. Advocate Shobha Gupta, representing Bano, mentioned the matter before a bench headed by Chief Justice D.Y. Chandrachud. Gupta contended that chances were slim that the bench led by justice Ajay Rastogi would be able to hear the matter, as he was now a part of a constitution bench hearing. Bilkis Bano in Supreme Court Challenges Premature Release of 11 Convicts Who Had Gang-Raped Her and Killed Her Family Members During 2002 Gujarat Riots.

Bano has also moved a review petition against the apex court judgment allowing the Gujarat government to decide on the remission of the convicts. The Chief Justice said that the review has to be heard first and let it come before Justice Rastogi. Gupta submitted that the matter had to be heard in an open court. The Chief Justice said only the court can decide that, and added that he will decide on the listing after looking into the matter the evening.

The high court had held that the Maharashtra government should consider the remission since the trial in the case was conducted there after transfer from Gujarat.

(The above story first appeared on LatestLY on Nov 30, 2022 02:09 PM IST. For more news and updates on politics, world, sports, entertainment and lifestyle, log on to our website latestly.com).