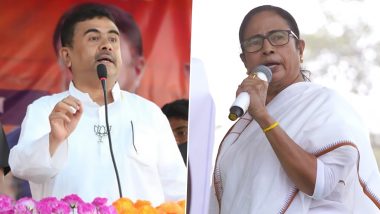 Kolkata, May 28: The Bharatiya Janata Party (BJP) on Friday slammed West Bengal Chief Minister Mamata Banerjee Banerjee for skipping the review meeting to assess the damages caused by severe cyclonic storm Yaas. Lashing out at Mamata Banerjee, Leader of opposition in the West Bengal Assembly Suvendu Adhikari said that Mamata Banerjee is insensitive to the sufferings of the people of the state.

Adhikari, in a tweet, said, “Today is a dark day in India’s long-standing ethos of cooperative federalism, a principle held sacred by PM @narendramodi. CM @MamataOfficial  has shown once again that she is insensitive to the sufferings of the people of West Bengal..” Cyclone Yaas: PM Narendra Modi Holds Meeting With Odisha CM Naveen Patnaik To Assess Impact Of The Tropical Cyclone.

“The way Mamata Didi behaved with PM Modi reflects her dictatorial nature and lack of respect for constitutional values. Instead of working with the PM for the betterment of West Bengal, she is indulging in petty politics. Her skipping the meeting is disgusting,” reported India Today, quoting Leader of Opposition in the West Bengal Assembly as saying. Cyclone Yaas: PM Narendra Modi Announces Rs 1,000 Crore Relief Package After Aerial Survey of Affected Areas in West Bengal and Odisha.

On previous occasions, PM @narendramodi has reviewed floods, cyclone situations with different CMs who belonged to non-NDA parties. None of these CMs behaved the way Mamata Didi behaved today. There is a time for politics and a time for governance. Didi can’t comprehend that. pic.twitter.com/ZGUSxRdEiH

Bharatiya Janata Party (BJP) president J P Nadda also hit out at the West Bengal CM. Nadda tweeted, “When PM Narendra Modi stands strong with the citizens of West Bengal in the wake of Cyclone Yaas, Mamata ji should also set aside her ego for the welfare of people. Her absence from the PM meeting is murder of constitutional ethos & the culture of cooperative federalism.”

Notably, Banerjee met the Prime Minister before the review meeting and submitted a copy of the damages caused by the cyclone to him. She even left the Air Force Station before the meeting commenced. Sources in the administration confirmed that Banerjee had asked for a separate meeting with Modi ahead of the review meeting convened by the Prime Minister. Accordingly, a slot of 15 minutes was allotted. During which Banerjee submitted a detailed report of the damages caused by the storm to PM Modi.

In the 15-minute meeting, Banerjee briefed the Prime Minister about the damages caused to the agricultural fields, residential buildings, embankments and roads. The Chief Minister then flew to Digha to take stock of the situation. Before her brief meeting with the Prime Minister, Banerjee conducted two administrative meetings -- one at Hingalganj in North 24 Parganas and another at Sagar in South 24 Parganas.

(The above story first appeared on LatestLY on May 28, 2021 08:32 PM IST. For more news and updates on politics, world, sports, entertainment and lifestyle, log on to our website latestly.com).