Pillai was declared blessed in 2012 in Nagercoil and the Vatican cleared him for sainthood in 2020. 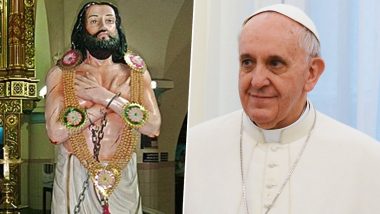 Chennai, May 15 (IANS) Pope Francis on Sunday canonised Devasahayam Pillai, or 'Blessed Lazarus', who became the first layman from India to be granted sainthood.

Pillai, a Hindu who converted to Christianity in the 18th century - drawing the ire of the then rulers, was canonised at 2.30 p.m. (IST) at the St Peter's Basilica in Vatican along with nine others. A miracle attributed to him was recognised by Pope Francis in 2014 leading to his canonisation now.

Church records state that Pillai was born as Neelakanda Pillai in Nattalam in the Kanniyakumari district in 1712. Kanniyakumari was then part of the Travancore kingdom and Pillai's embracing of Christianity in 1745 made the Maharaja angry. Devasahayam Pillai Becomes 1st Indian Layman To Be Declared Saint by Pope Francis.

An court official, Pillai introduced to Christianity by Dutch naval officer, Captain De Lannoy when he was in Travancore. After his conversion, he assumed the name of 'Lazarus or 'Devasahayam', meaning 'God is my Help'.

The Travancore Maharaja was, however, furious about his conversion and shot him dead at Aralvaimozhy forest on January 14, 1752.

Pillai was declared blessed in 2012 in Nagercoil and the Vatican cleared him for sainthood in 2020.

His mortal remains were interred near the altar inside St Xavier's Church, Kottar, Nagercoil which is a diocesan Cathedral now.

Special prayers were conducted at churches that are linked to his life in the Kottar diocese of Kanniyakumari.

At Thiruvananthapuram, Bishop Thomas J Netto led prayers at the St Joseph's Cathedral, Palayam and Neyyatinkara Bishop Vincent Samuel led the Pontifical mass at the St. Devasahayam Church in Chavallorpatta near Parassala under the Neyattinkara diocese.

A vehicle rally was held from St Joseph's Cathedral, Palayam, Thiruvananthapuram to the St Antony's Pilgrim Church at Kamukincode on Saturday. This was to commemorate the visit of Devasahayam Pillai when he called on those who sought refuge in the locality after fleeing from being persecuted for having converted to Christianity.

Catholic Bishop Conference of India (CBCI) laity secretary, V.C. Sebastian told IANS that the "conferment of sainthood to Devasahayam Pillai will rejuvenate the Christian community in the country, in particular the Catholic laity. The elevation of a layman as a saint or canonisation of a common man has immense relevance to the present times".

(The above story first appeared on LatestLY on May 15, 2022 05:57 PM IST. For more news and updates on politics, world, sports, entertainment and lifestyle, log on to our website latestly.com).