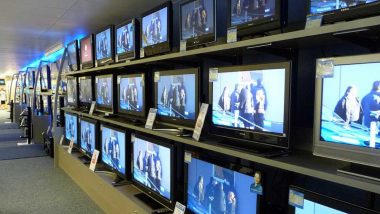 Mumbai, July 31: With the Indian government imposing restrictions on imports of colour televisions from China, Vietnam, Malaysia, Hong Kong and Korea, Chinese firms have been the worst affected. As per data, India imported colour television from China amounting to $293 million in FY 2019-20.

Earlier on Thursday, the Directorate General of Foreign Trade (DGFT) in its notification had said, "Import policy of colour television.....is amended from free to restricted." The DGFT had mentioned that the move has been taken to reduce inbound shipments of non-essential items from countries like China. Indian Govt Imposes Import Restrictions on Colour Television From Countries Like China, Vietnam, Malaysia, Hong Kong, Korea.

Adding more, the notification stated, "Actual user condition would not be applicable for importers applying for an authorization to import the goods 'Restricted' in this Notification. The procedure for grant of a license will be separately issued by DGFT."

According to the government notification, the curbs will be applicable for TV sets of all screen sizes -- ranging from 36 cm to over 105 cm. Also, Liquid crystal display (LCD) television sets of screen size below 63 cm have also been restricted under the new import order.

It is to be known that China is the largest exporter of TV sets in India. It was followed by countries like Vietnam, Malaysia, Hong Kong, Korea, Indonesia, Thailand, and Germany.

(The above story first appeared on LatestLY on Jul 31, 2020 12:21 PM IST. For more news and updates on politics, world, sports, entertainment and lifestyle, log on to our website latestly.com).