India on Wednesday hit out at China for bringing out a new land border law and said it expects Beijing to avoid taking any action under the "pretext" of the legislation that could "unilaterally" alter the situation in the border areas. 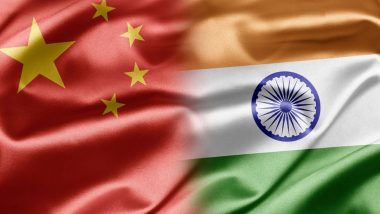 New Delhi, Oct 27: India on Wednesday hit out at China for bringing out a new land border law and said it expects Beijing to avoid taking any action under the "pretext" of the legislation that could "unilaterally" alter the situation in the border areas.

External Affairs Ministry Spokesperson Arindam Bagchi described China's decision to bring out the law as a matter of "concern" as it can have implications on the existing bilateral pacts on the management of the border and the overall boundary question. India, China Face Off Along LAC in Arunachal Pradesh As Patrols of Two Countries Came Face to Face at One Location.

"China's unilateral decision to bring about a legislation which can have implication on our existing bilateral arrangements on border management as well as on the boundary question is of concern to us," he said.

"Such unilateral move will have no bearing on the arrangements that both sides have already reached earlier, whether it is on the boundary question or for maintaining peace and tranquillity along the LAC in India-China border areas," he said.

Bagchi was responding to media queries on China's new land boundary law that came in the midst of a 17-month border standoff between the two countries in eastern Ladakh.

"We also expect that China will avoid undertaking action under the pretext of this law which could unilaterally alter the situation in the India-China border areas," he said.

"Furthermore, the passage of this new law does not in our view confer any legitimacy to the so-called China Pakistan "Boundary Agreement” of 1963 which Government of India has consistently maintained is an illegal and invalid agreement," the spokesperson said.

China's national legislature on October 23 adopted the new law on the protection and exploitation of the land border areas.

Xinhua news agency reported that the law, which becomes operational from January 1 next year, stipulates that "the sovereignty and territorial integrity of the People's Republic of China are sacred and inviolable."

"We have noted that China has passed a new 'Land Boundary Law' on October 23. The law states among other things that China abides by treaties concluded with or jointly acceded to by foreign countries on land boundary affairs," Bagchi said.

He said the legislation also has provisions to carry out reorganisation of districts in the border areas, noting that India and China have still not resolved the boundary question.

"Both sides have agreed to seek a fair, reasonable and mutually acceptable resolution to the boundary question through consultations on an equal footing," he said.

"We have also concluded several bilateral agreements, protocols and arrangements to maintain peace and tranquillity along the LAC in India-China border areas in the interim," he said.

India and China have already held over 20 rounds of border talks under the framework of Special Representatives dialogue which was set up to find an early solution to the border dispute.

Both sides have been maintaining that pending the final resolution of the boundary issue, it is necessary to maintain peace and tranquillity in the border areas.

China brought out the new border law in the midst of the eastern Ladakh row.

The eastern Ladakh border standoff between the Indian and Chinese militaries erupted on May 5 last year following a violent clash in the Pangong lake areas and both sides gradually enhanced their deployment by rushing in tens of thousands of soldiers as well as heavy weaponry.

As a result of a series of military and diplomatic talks, the two sides completed the disengagement process in the north and south banks of the Pangong lake in February and in Gogra area in August.

The last round of military talks on October 10 ended in a stalemate following which both sides blamed each other for the impasse.

In a strong statement after the 13th round of talks, the Indian Army said the "constructive suggestions" made by it at the negotiations were neither agreeable to the Chinese side nor Beijing could provide any "forward-looking" proposals.

Each side currently has around 50,000 to 60,000 troops along the Line of Actual Control (LAC) in the sensitive sector.