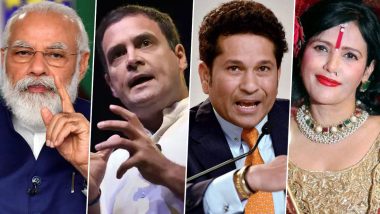 New Delhi, September 14: An investigative report by The Indian Express on Monday revealed that a China-based technology company with links to the Chinese Communist Party is snooping on hundreds of Indians, including Prime Minister Narendra Modi, Congress lawmaker Rahul Gandhi, former Indian cricketer Sachin Tendulkar and self-styled god woman Radhe Maa. Reacting to the report, the government said it was not "surprised" by the expose on the "hybrid war" by China. India-China Border Stand-Off: Chinese Troops' Attempts to Unilaterally Alter Status Quo in Violation of Bilateral Agreements, Defence Minister Rajnath Singh Tells Beijing.

"The decision to ban Chinese apps was taken because of this misuse. Indian agencies flagged how common Indians unknowingly were contributing to the data bank of Chinese companies, which in turn was being shared with Chinese Communist Party and agencies," a government official was quoted by News18 as saying in the context of the report. The report comes at a time when India and China are engaged in a four-month-long standoff at the LAC in eastern Ladakh.

Despite several levels of dialogue, there has not been any breakthrough and the deadlock continues. "In the context of the current tension, this is significant. Open-source data if collated and analysed properly can give 80% of the answers a hostile agency could be looking for," another official said.

(The above story first appeared on LatestLY on Sep 14, 2020 01:11 PM IST. For more news and updates on politics, world, sports, entertainment and lifestyle, log on to our website latestly.com).