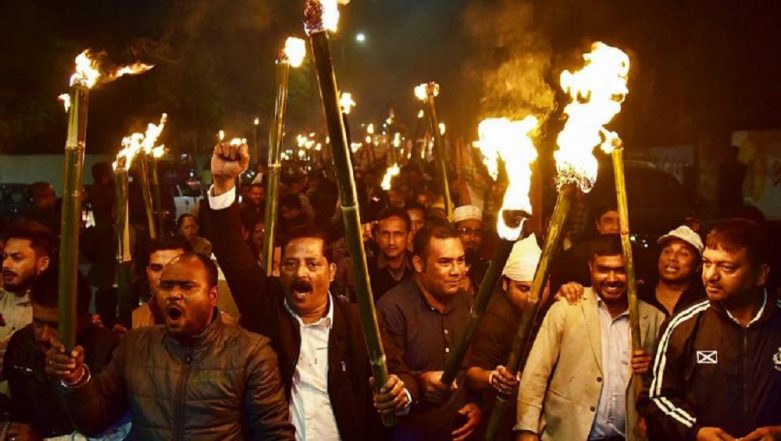 Imphal, February 12: In the wake of the protests held against the Citizenship (Amendment) Bill in Manipur, Section 144 has been imposed in Imphal East District till 12 February 2019 until further orders. Section 144 prohibits assembly of five or more persons, holding of public meetings. The decision has been taken by the authorities due to the situation arising out of intense agitation launched by various Civil Society Organisations against the passing of Citizenship Amendment Bill, 2016 in the Lok Sabha. Protests against the Bill were held in parts of Manipur by Manipur Peoples Party (MPP) and six students' organisations. Citizenship Amendment Bill: Mizoram, Manipur and Assam Students Boycott Republic Day Celebrations, Burn Effigies of Narendra Modi, Rajnath Singh.

On Monday, six women sustained injuries when the police fired tear gas shells and smoke bombs at a marketplace to disperse protesters in Imphal. The protesters enforced a road blockade demanding the withdrawal of the citizenship bill. The injured women were then taken to the Regional Institute of Medical Sciences (RIIMS). Citizenship Amendment Bill 2019 Passed in Lok Sabha Amid Protest From Opposition.

Manipur: Section-144 imposed in Imphal East District till 12 February 2019 until further orders due to "situation arising out of intense agitation launched by various Civil Society Organisations against the passing of Citizenship Amendment Bill, 2016 in the Lok Sabha." pic.twitter.com/4Qtzv48YnW

The Citizenship (Amendment) Bill was passed in the Lok Sabha in the recently concluded winter session of Parliament, leading to raging protests in the northeastern states. Union Home Minister Rajnath Singh told the Opposition that the bill was not against the provisions of the Constitution and would give succour to persecuted minorities in the three neighbouring countries. Citizenship Amendment Bill 2016: 11 North-East Parties Oppose Bill, Seeks Centre to Scrap the Legislation.

Protests were held, markets were closed and effigies of Prime Minister Narendra Modi and others were burnt as part of protests against the controversial Citizenship (Amendment) Bill (CAB) continued across Manipur.  In January, Manipur Chief Minister N Biren Singh had met Union Home Minister Rajnath Singh in Delhi and raised issues related to the protection and rights of the indigenous people of the state. Earlier, Singh had said the bill will have no effect on the state.