Director General (Prisons) Sandeeep Goyal told IANS that Sukesh didn't eat food from April 23 to May 2 and then again from May 4 to May 12. "During this period he was put on IV fluid/Glucose (Intravenous) in the Jail dispensary," Goyal said. 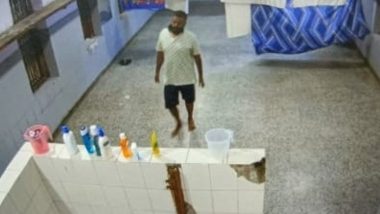 New Delhi, May 17: Jailed conman Sukesh Chandrashekhar twice went on hunger strike at the Tihar jail in protest against the prison authorities. The conman wanted the Jail authorities to relax 'inmate meeting' rules for him as he wanted to meet his wife, who is also lodged at the Tihar prison, more than two times a month.

He protested twice and later went on a hunger strike for 10 days and then again for nine days, it was officially learnt on Tuesday. Director General (Prisons) Sandeeep Goyal told IANS that Sukesh didn't eat food from April 23 to May 2 and then again from May 4 to May 12. "During this period he was put on IV fluid/Glucose (Intravenous) in the Jail dispensary," Goyal said.

The top prison official informed that Sukesh was demanding to arrange a meeting with his wife Leena Maria Paul, who is currently lodged in Jail no.6 of Tihar Jail.

"In this connection, he is already being allowed 'inter-jail mulaqat' with his wife twice a month, i.e., on every 1st and 3rd Saturday of a month, as allowed to other inmates," Goyal said, adding that the accused conman wanted extra 'mulaqat' in addition to these, which was not allowed. For this misconduct, a Jail punishment was also made against Sukesh Chandrashekhar. Reportedly, there are 32 criminal cases registered against the couple -- Sukesh and Leena -- that are pending before the Courts. Jacqueline Fernandez-Conman Sukesh Case: Actress Seeks Permission from Delhi Court to Travel for IIFA Awards.

Born in a lower middle-class family in Karnataka's Bengaluru, Sukesh always dreamt of being a millionaire in his life and to materialise his dream, he was determined to earn money by hook or by crook. He started conning people from the age of 17. In 2007, he duped around 100 people of Rs 75 crore on the pretext of providing them a job. At that time he posed as a high-ranking bureaucrat. Later, after many years he also duped politician TTV Dhinakaran of Rs 50 crore. Delhi Police's Crime Branch arrested Sukesh on Dhinakaran's complaint and he was lodged at Tihar Jail.

What was more astonishing was that the conman continued to run the racket from inside of the Tihar Jail. He is accused of extorting Rs 200 crore from the family of former Fortis Healthcare and Ranbaxy Lab promoters Shivinder and Malvinder Singh within the premises of the prison.

The Delhi Police had in November 2021 filed a charge sheet against the accused conman, his wife Leena Maria Paul and 12 others in the same case of duping Malvinder's wife of Rs 200 crore.

The Economic Offence Wing (EOW) of Delhi Police had written to the Tihar Jail authorities to take action against 82 jail officials who allegedly helped inmate Sukesh by providing him luxurious facilities inside the prison.

In the letter, accessed by IANS, the EOW had mentioned the names of all the 82 jail officials. Initially, Sukesh was lodged at Rohini prison complex and then shifted to Tihar Jail number 4 and now he is currently lodged at Jail number 1 of the Tihar prison.

During the probe, the CCTV footage of ten cameras of the Rohini jail were collected and examined and it was found that the view of CCTV cameras installed in the barrack of accused Sukesh was completely blocked by using curtains and putting mineral water bottles in front of the camera.

The EOW had mentioned in the letter that no action was taken to remove the objects from the view of the camera and for this jail officials got a hefty amount from Sukesh and his associates. Jacqueline Fernandez-Conman Sukesh Case: Delhi Court Gives Notice to ED As the Actress Seeks Permission To Travel Abroad for IIFA Awards 2022.

"Further, from the statements of the arrested Jail Officials and documents, facts and evidence collected during investigation, it has come out that the money was paid to all the staff irrespective of their duties as bribe to ensure that they keep themselves away from spilling beans and remain silent. The officials of the Jail No 10, Rohini Jail, have also been found involved in taking undue favour from the accused persons, hence, a detailed enquiry/investigation is required to be conducted to reach at a logical conclusion," an excerpt from the letter read.

It has been learnt that inmate Sukesh used to pay around Rs 1.50 crore every month for luxury facilities without any hindrance.

(The above story first appeared on LatestLY on May 17, 2022 03:37 PM IST. For more news and updates on politics, world, sports, entertainment and lifestyle, log on to our website latestly.com).