Padama Shree awardee Shri Jai Prakash Lakhiwal has designed the frame for the Preamble in this portal in such a way that it has elements of arts from all States/UTs of Union of India. This design will also be reflected on certificates. 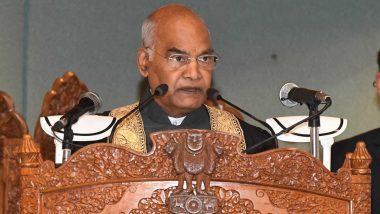 Azadi ka Amrit Mahotsav is an initiative of the Government of India to celebrate and commemorate the75 years of progressive India and the glorious history of it’s people, culture and achievements. As part of this Mahotsav, India is celebrating Constitution Day on 26th November with great fervour and gaiety in the Central Hall of Parliament House.

Hon’ble Minister of Parliamentary Affairs (Shri Pralhad Joshi) informed that : Hon’ble President of India will be leading the celebrations of Constitution Day live from Central Hall of Parliament on 26th November 2021 at 11:00 AM onwards. Happy Constitution Day 2020 Wishes And Samvidhan Divas HD Images: WhatsApp Messages, Status And Greetings to Share on National Law Day in India.

The occasion will also be graced by Hon’ble Vice- President, Hon’ble Prime Minister, Hon’ble Speaker, Ministers, MPs and other dignitaries. This function will be live streamed through Sansad TV/DD/ other TV Channels and Online Portals. After the speech of Hon’ble President, whole nation is invited to read Preamble to the Constitution live with him.

Public at large including Ministries/Departments of Govt.of India, State/UT Governments, Schools/Colleges/Universities/Institutions/ Bodies, Bar Councils etc. have been requested to join Hon’ble President in reading Preamble to the Constitution on 26.11.2021 from their places, following the Covid 19 protocols.

A call has been made to public at large to read Preamble enmass with Hon’ble President through various modes such as Radio/TV/Social Media etc. using dignitaries from various fields.

So as to make it a public campaign and for ensuring Jan Bhagidari, this Ministry has developed two portals, one “Online Reading of the Preamble tothe Constitution” in 23 languages (22 official languages and English) and another “Online Quiz on Constitutional Democracy” ( mpa.nic.in/constitution-day) wherein anybody can participate from anywhere and get certificates.

Padama Shree awardee Shri Jai Prakash Lakhiwal has designed the frame for the Preamble in this portal in such a way that it has elements of arts from all States/UTs of Union of India. This design will also be reflected on certificates.

The portal “Online Quiz on Constitutional Democracy” (mpa.nic.in/constitution-day) will be launched by Hon’ble President on 26th November, 2021 from Central Hall. It is a simple digital quiz with the purpose of “Jan bhagidari” having very simple and basic questions on Indian Constitution and its Democracy with special reference to Fundamental duties enshrined therein. Anyone can participate in this quiz and get participation certificate with simple registration in his name giving his/her name, telephone number, age group. There may be multiple registrations on a single mobile number. India, World Bank Sign Loan Agreement To Improve Quality of Learning for Over 50 Lakh Students Across Andhra Pradesh.

There would be a question bank of about 1000 questions and each time 5 questions would randomly pop up which would be attempted by any participant on the quiz. Participant can check correctness of his/ her answers. But on simple participation, everyone would get certificate because purpose of quiz is to popularise the basic values of Indian constitution and Parliamentary Democracy and not to test their knowledge. It would be in both Hindi and English languages so that more and more people including senior citizens can participate from across the world.

Minister also requested the public at large through media that more and more people should join the celebrations from Central Hall of Parliament with Hon’ble President and Hon’ble Prime Minister on that day and share their photos reading preamble and getting certificates from their respective places using #SamvidhanDiwas and tagging Facebook @MOPAIndia, Twitter @mpa_india and Instagram @min_mopa.

Minister going into the history of Constitution Day stated that in 2010 being the Chief Minister of Gujarat, Hon’ble Prime Minister carried “Samvidhan Gaurav Yatra “ in Gujarat and was the force behind declaration of 26th November as Constitution Day from 2015. For making it a national celebration, let us all share our certificates on the social media.

(The above story first appeared on LatestLY on Nov 23, 2021 05:15 PM IST. For more news and updates on politics, world, sports, entertainment and lifestyle, log on to our website latestly.com).