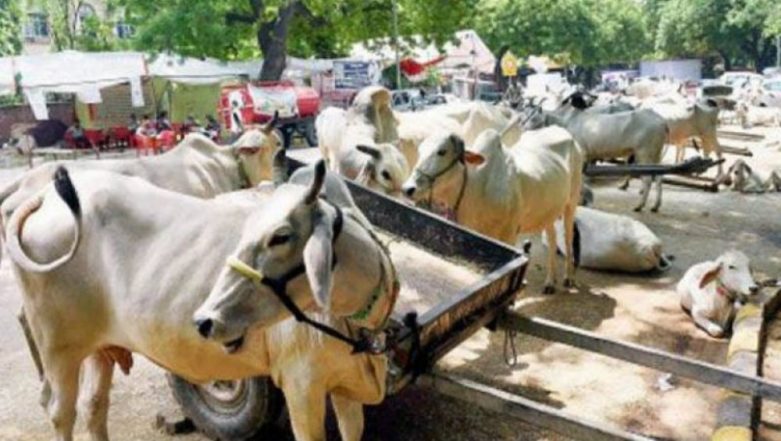 Gurugram, June 27: Two men carrying animal meat were allegedly chased and beaten up by cow vigilantes (gau rakshaks) in Haryana over suspicion of smuggling beef on Tuesday. According to a tweet by ANI, the incident took place on June 25 near Sohna road in Gurugram. Shamsher Singh, ACP Crime, was quoted by ANI saying that the two trucks have been seized and sample of the meat has been sent to forensic lab for test. Police said that investigation into the matter is underway". Madhya Pradesh: Cow Vigilantes at It Again, Thrash 3 Youths Including 1 Woman Over Beef Rumours.

Reports inform that when the truck was stopped by gau rakshaks, four men got off the truck and began to flee from the spot. According to reports, Shathil Ahmad, a resident of Palwal district, and Tayaid were arrested while two others fled the spot, Gurgaon police PRO Subhash Bokan informed. Police added saying that they were on their way to deliver beef consignment in Delhi. "We have registered an FIR under various sections of the Haryana Gauvansh Sanrakshan and Gausamvardhan Act, 2015," the police was quoted in the report. Cow Vigilantes Beat Up Old Man and Throw Him in Gutter in Balrampur District, UP Police Arrest 4.

In India, where cows are considered sacred by a large segment of the population, cow vigilante violence involving mob attacks in the name of "cow protection" have grown since 2014. Cattle slaughter is banned in most states of India. Recently emerged cow vigilante groups, claiming to be protecting cattle, have been violent leading to a number of deaths.