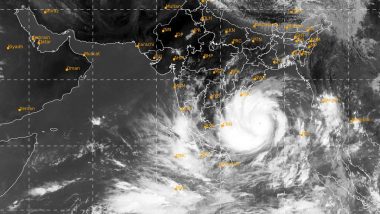 Cyclone in Bay of Bengal Near Odisha (Photo Credits: IMD)

If this cyclonic circulation intensifies into a depression and further into a deep depression, it will lead to a formation of a cyclonic storm. The next cyclone will be named as 'Gati', meaning speed or pace. The name 'Gati' has been given by India and is the second name in the new list of which comprises of 169 cyclones names from 13 member countries. Here's Your Glossary For Jargons Related to Cyclonic Storm.

Earlier this month, Cyclone Nisarga had made a thumping landfall at Shriwardhan-Dive Agar in Raigad district. It made a landfall on June 3 and later weakened into a low pressure area on the evening of June 4. As per reports,  Nisarga killed four people 4 lives- 2 each in Raigad and Pune before it fizzled out.

Meanwhile, the monsoon had advanced to majority regions across India.  Delhi witnessed another spell of early-morning rains made the weather pleasant on Monday. The IMD said rains are going to continue over the next few days with the monsoon expected to reach the city on Wednesday.

(The above story first appeared on LatestLY on Jun 22, 2020 04:00 PM IST. For more news and updates on politics, world, sports, entertainment and lifestyle, log on to our website latestly.com).