Delhi: Fire Breaks Out at Godown in Punjabi Bagh, One Dies 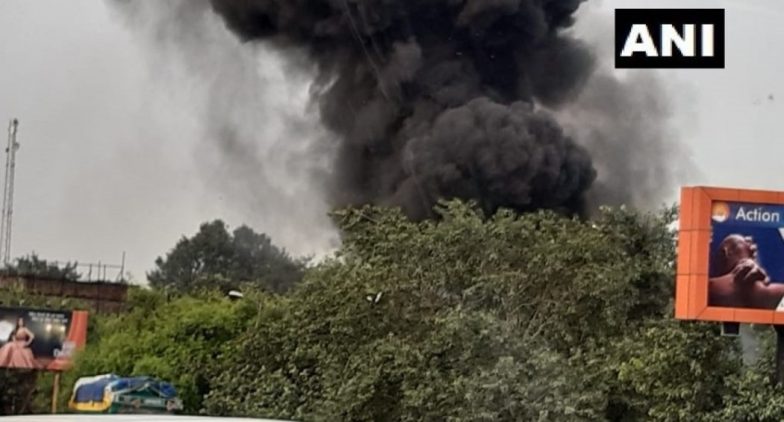 Fire Breaks Out at Godown in Delhi (Photo credits: ANI)

Delhi, September 7: At least one person was killed after a massive fire broke out at a godown located in Punjabi Bagh area of Delhi on Saturday. According to reports, police officials and fire brigade reached the spot after receiving the information of the blaze. 22 fire tenders were rushed to douse the fire. Fire at New Delhi Railway Station: Blaze Erupts in Rear Power Car of Chandigarh-Kochuveli Express, Passengers Safe.

In the visuals shared by news agency ANI, black fumes can be seen coming out of the godown. The cause of the fire is not yet known. Cooling down operations are underway. Delhi: Major Fire Breaks Out at Multi-Storey Building in Zakir Nagar, 6 Dead And Several Injured.

Fire at a godown in Delhi:

#UPDATE Delhi: One person dead in the fire accident that broke out at a godown in Punjabi Bagh earlier today. Cooling operation still underway. https://t.co/1r4G4Fx8Wz

On Friday, a similar fire broke out at New Delhi Railway Station. The blaze erupted in power car of Chandigarh-Kochuveli Express train which was stationed at platform number eight of the station. In the incident, no casualties were reported.