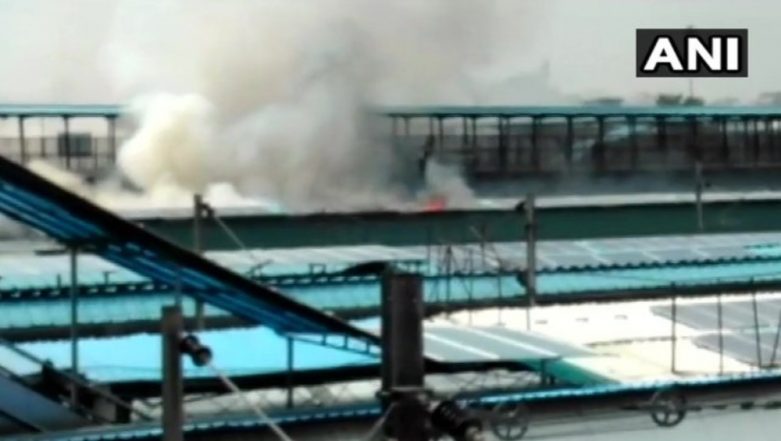 Delhi, September 6: A major fire broke out at New Delhi Railway Station on Friday, September 6. According to reports, a blaze erupted in rear power car of Chandigarh-Kochuveli Express train standing at platform 8 of the station. Four fire tenders were rushed to the incident spot to douse the fire. The cause of the fire is yet to be ascertained.  Delhi: Major Fire Breaks Out at Multi-Storey Building in Zakir Nagar, 6 Dead And Several Injured

In the visuals, black fumes can be seen coming out of the platform. The bogie of the Chandigarh-Kochuveli Express, also known as Kerala Sampark Kranti Express, parked on platform number 8 of New Delhi railway station caught fire. The fire has been doused. Delhi: Fire Breaks Out at AIIMS, 34 Fire Tenders Pressed to Douse Off Flames.

A fire has broken out in rear power car of Chandigarh-Kochuveli Express at platform number. 8 of New Delhi Railway Station. Four fire tenders are present at the spot. All passengers have been evacuated safely. https://t.co/KWkKjrIHkU pic.twitter.com/AvqrfyQyda

"The fire broke out in the rear power car of the 12218 Chandigarh-Kochuvalli Express around 1.40 pm", Northern Railway spokesperson Deepak Kumar was quoted as saying by PTI. Meanwhile, no casualties or injuries have been reported so far. Fire fighting operations are underway.